Air camped last night after leaving the ferry at 1.15am. Woke up to the smell and noise of s stock truck full of cattle. Much hilarity over who was responsible for the odour.

Breakfasted, we headed off to the Giants Causeway on the North East coast of Ireland. This is an amazing geological formation formed millions of years ago.

These are around 20 metres high. 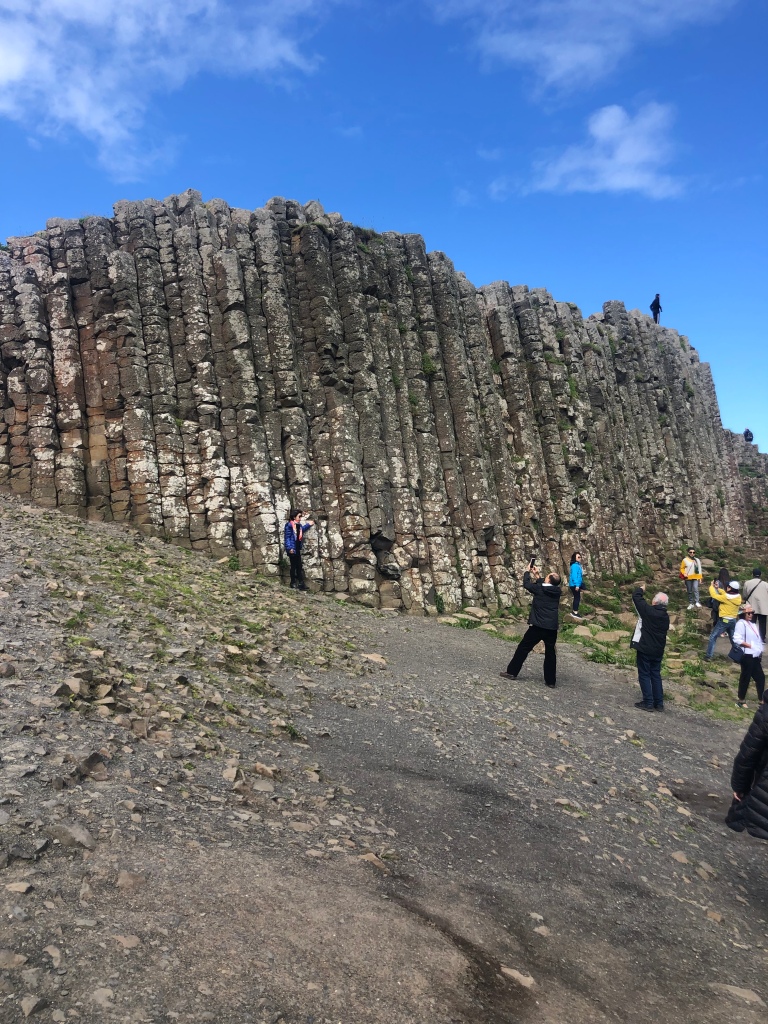 The only thing Irish about him is his jacket. 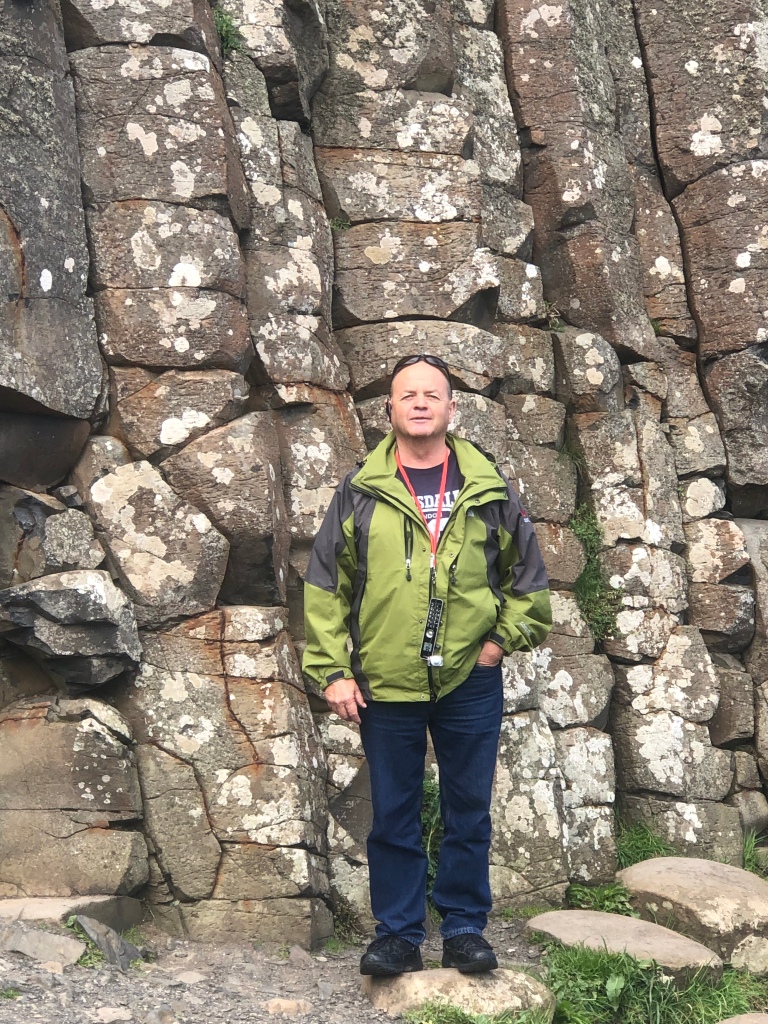 The small spikes in the middle, are called the Giants organ, and are over 80 metres high.

This stone is known as the Giants boot. Comfortable seat. 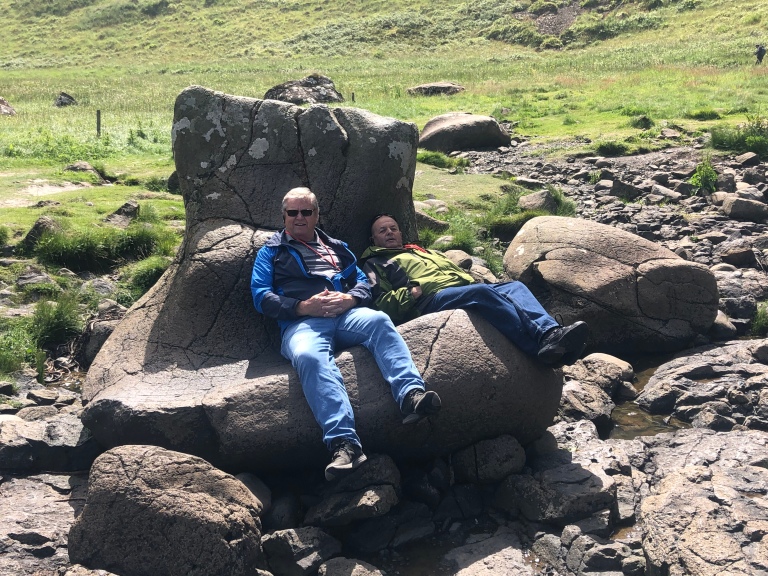 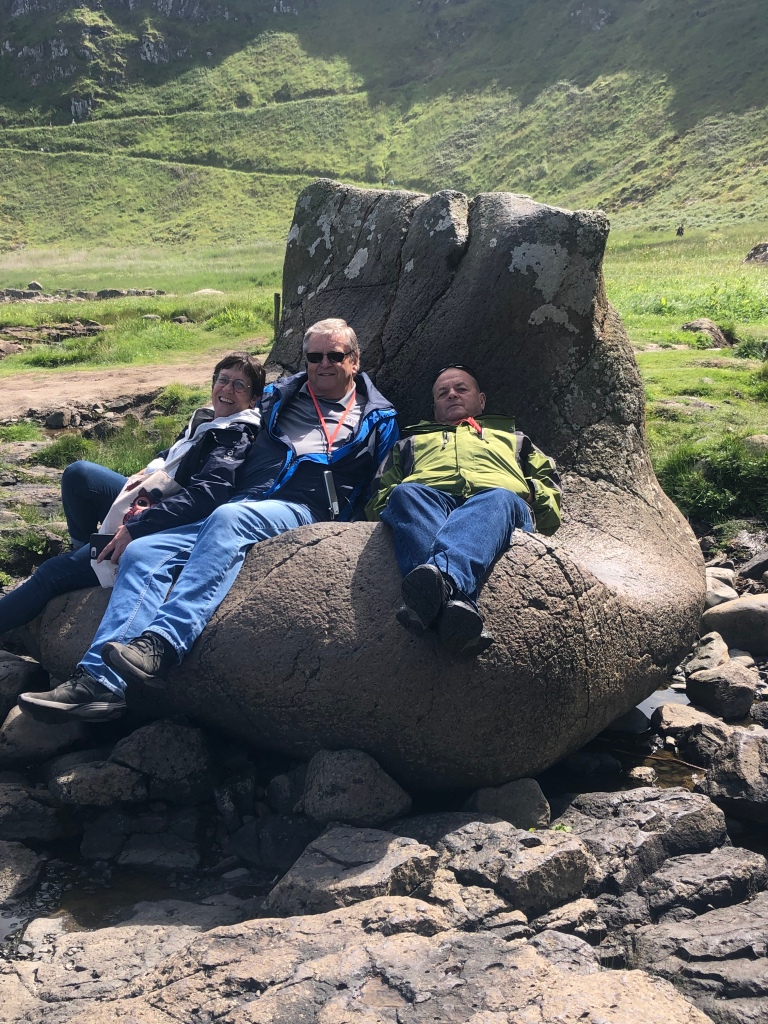 Section known as the organ pipes.

Looking out to the Atlantic. 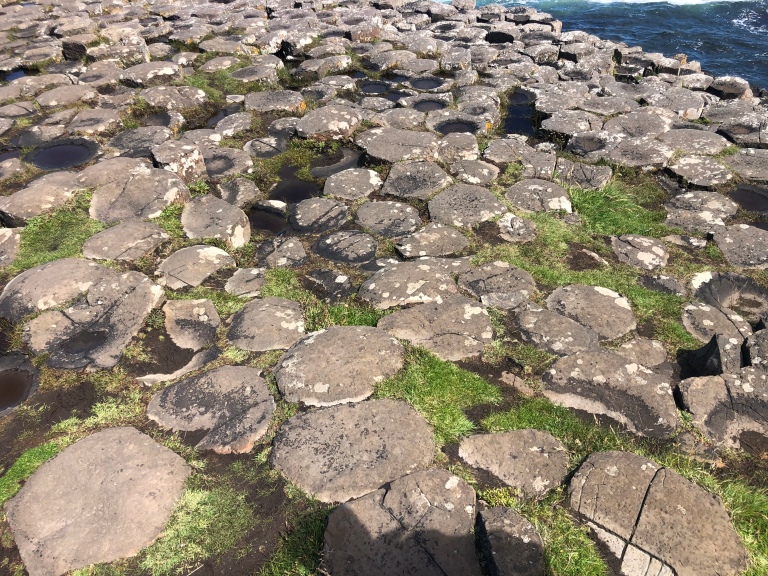 Group of primary school children having fun. This would never happen in Aus. Can you imagine the exhalation of breath from the principal if you told them that you were taking a group of students on an excursion to the open ocean involving climbing on uneven wet rocks with a high risk of falling involved. I spoke to one of the teachers who was a US teacher on exchange, and she said in the US you would practically need permission from the president.

Not so young students. 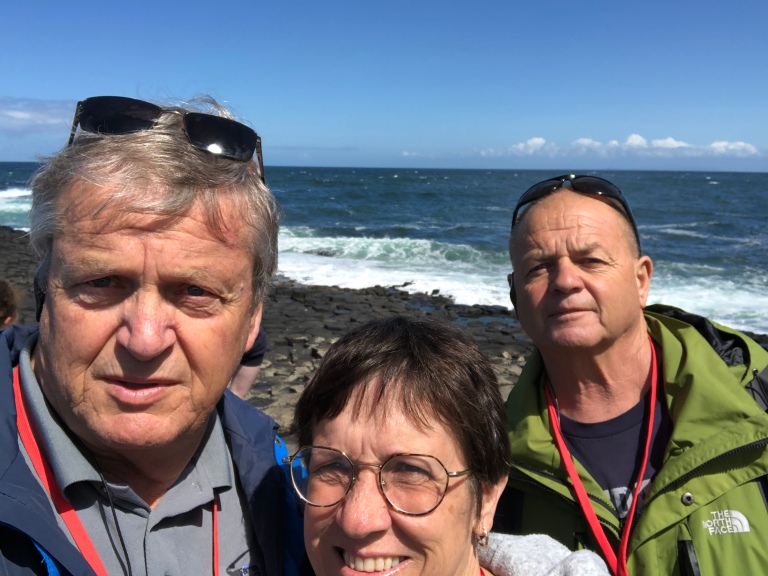 More of those amazing stones.

Rock climbing over we headed off back to Belfast for a couple of days. Saw this nice old Rover in car park. 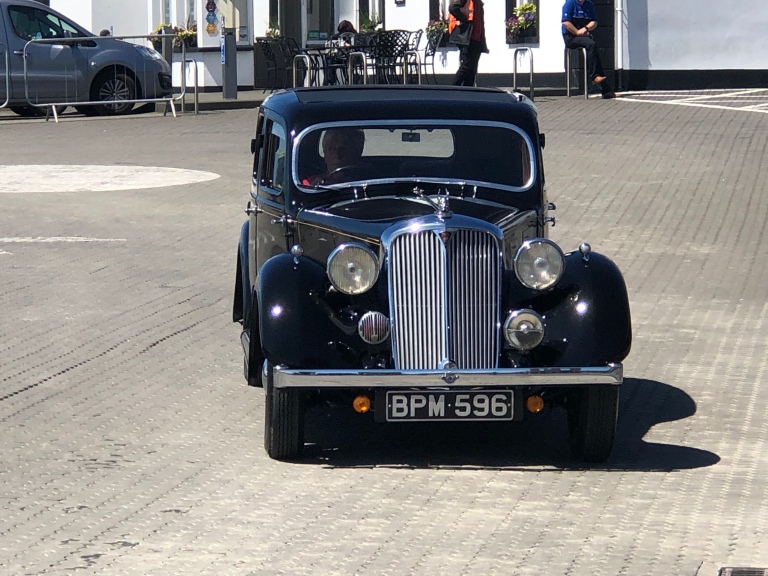 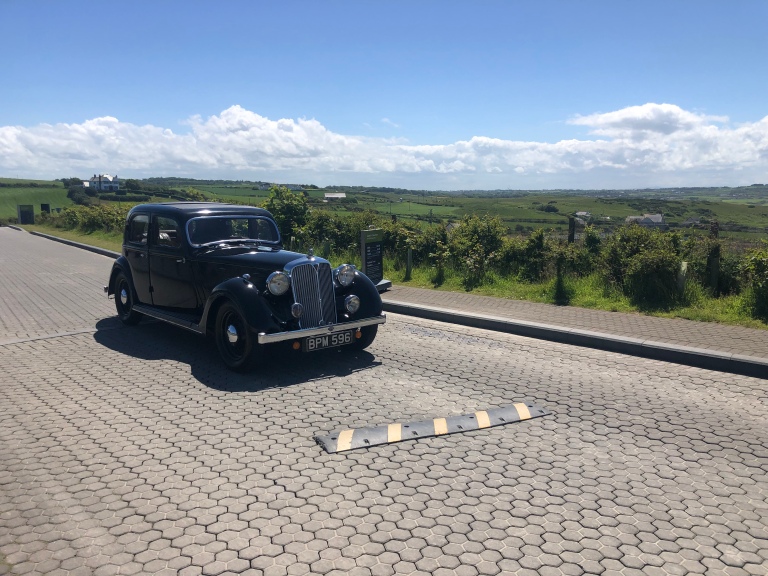 Into town for dinner at the oldest pub in Belfast, opened in 1630. 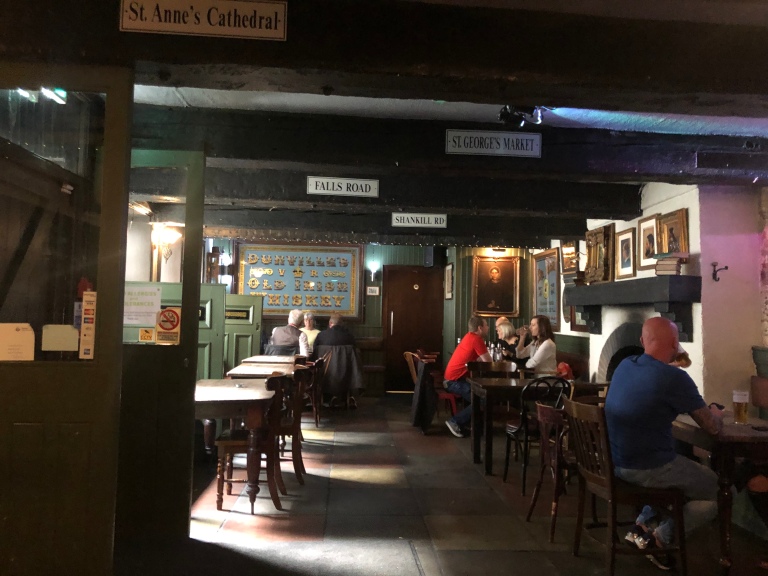 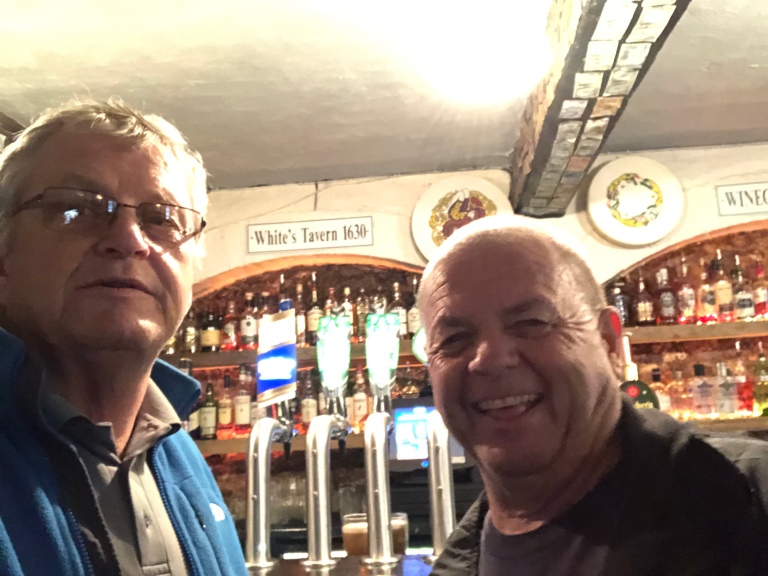 Dinner done, we caught a cab for a black cab tour of Dublin. During the tour you get a run down on what has happened in Dublin over the last 200 years and why.

The whole experience is mind blowing, where they still lock the gates in the wall at 9.00pm each night, opening them again at 6.00am. We saw this first hand when we saw an elderly catholic couple who were caught in their car on the protestant side of the wall. The taxi driver had to calm them and then explain to them how to get back. To make it worse the marching season starts today and there are police in riot vehicles everywhere.

Following are shots from around the city of murals ect.. 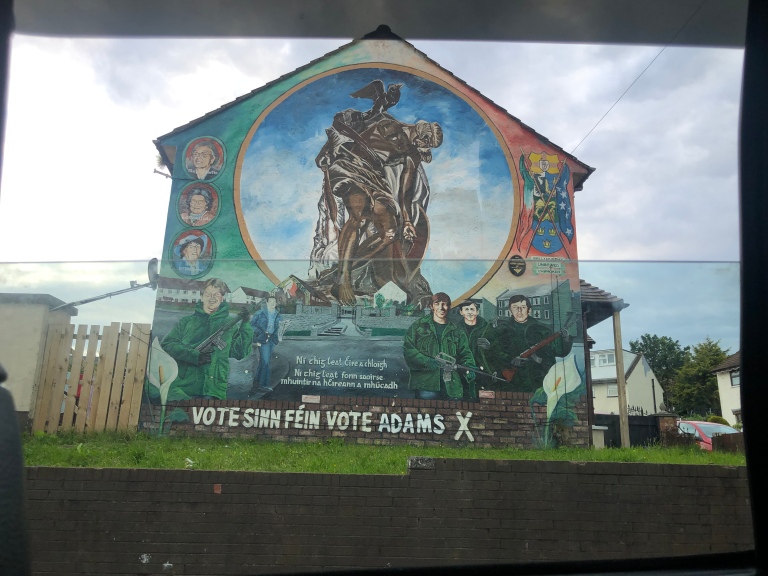 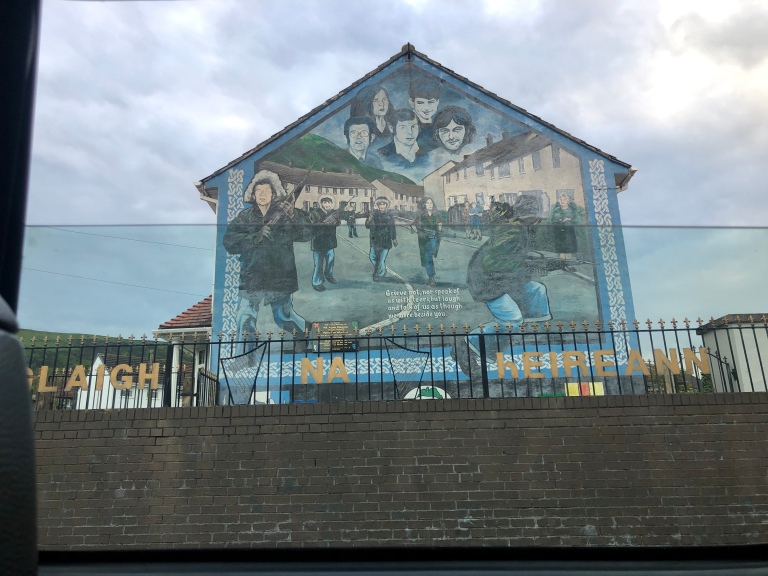 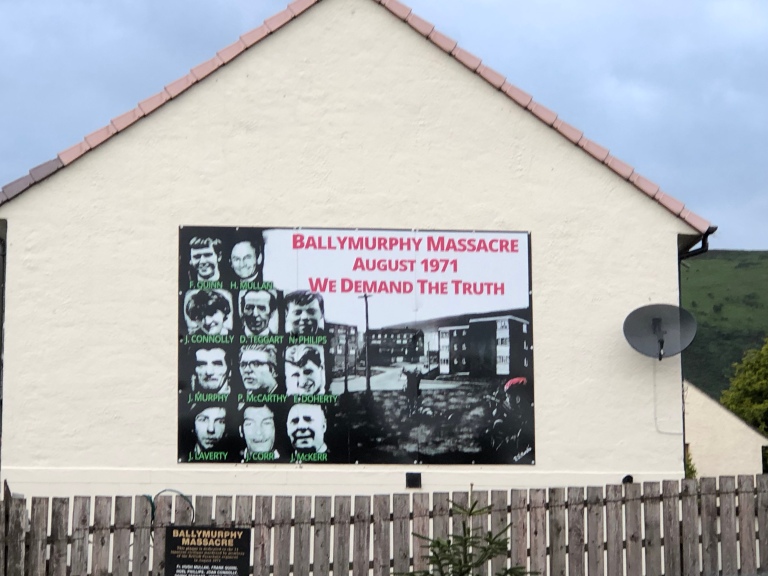 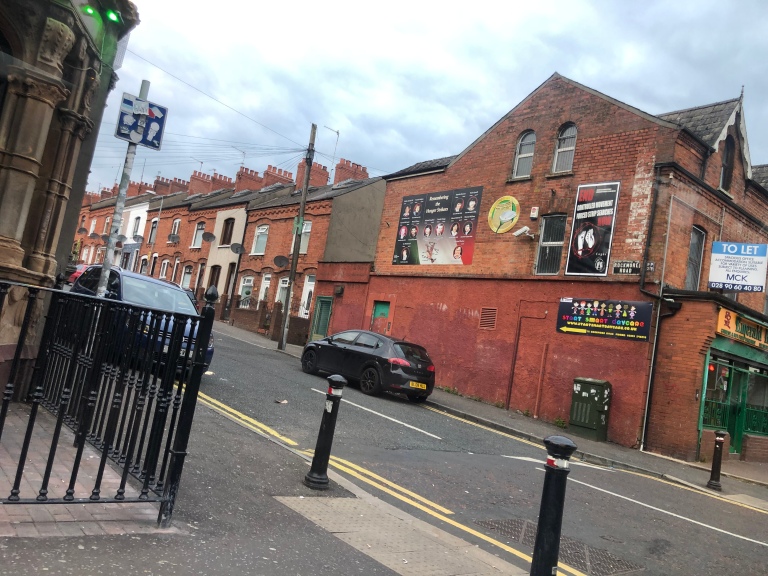 Monuments to the fallen.

The writing above the door talks about the rocket propelled grenades that were launched into upstairs because they thought they might be having a meeting.

Shots of part of the wall which is kilometres long and over 10 metres high.

One of the locked gates. It was at this gate that we met the elderly couple.

These gates are never opened as it is deemed too dangerous. 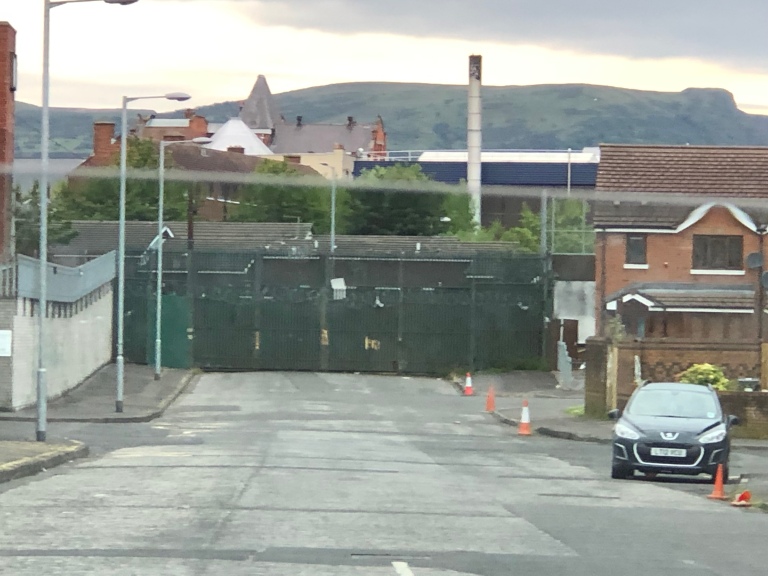 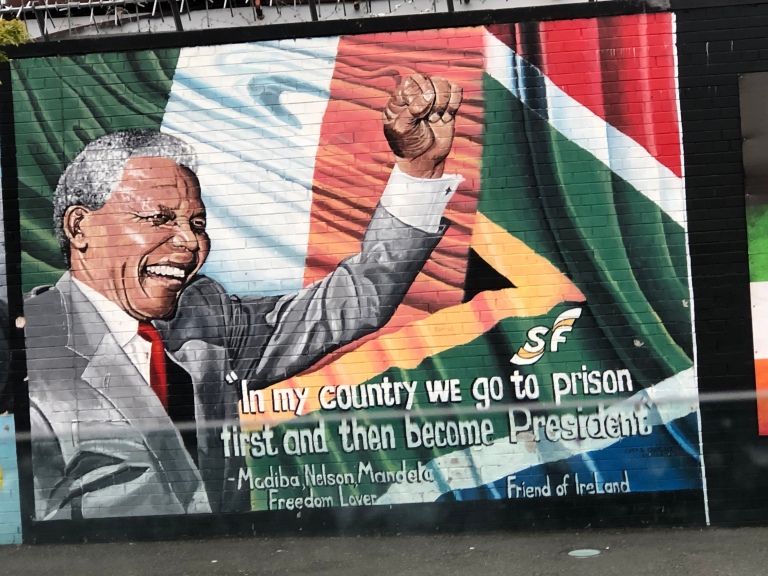 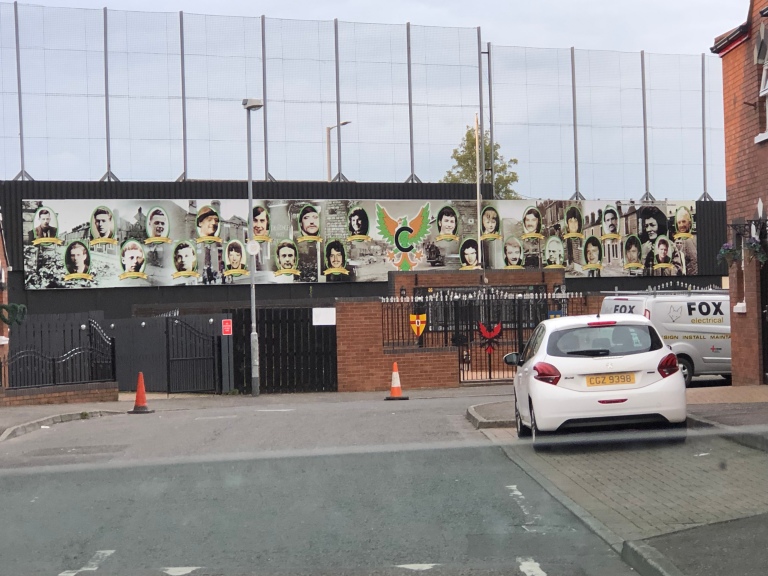 Even though there is a 10 metre wall, notice the back of the house has a protective structure over it. This structure is over 100 metres long and it is to stop the Catholics on the other side of the fence from throwing objects into the Protestant back yards. If you were to go to the area where the Catholics houses backed onto the wall you will see the same thing.

These are the 10 hunger strikers, who died for what they believed in. The Protestant’s deemed them criminals, but they saw themselves as prisoners of war.

Probably the most well known is Bobby Sands.

Interesting to note that the taxi driver said there where there are no police, there are no drugs and no crime. There are areas the police will not go into.

Australia isn’t such a bad place after all.

5 thoughts on “GIANTS CAUSEWAY AND BELFAST”