Another busy, but great day. Also happens to be Jono’s 25th birthday. Travelled from Kirkwall up around the North East coastal region of the Mainland Island.

First stop was Wideford Cairn on Wideford Hill, where we had great views in all directions.

Kirkwall has become the cruise capital of the UK. 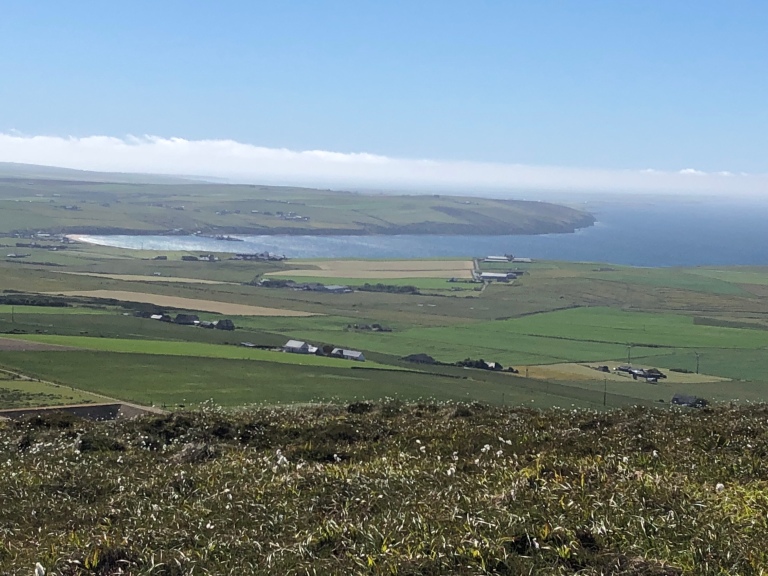 Kirkwall in the distance. 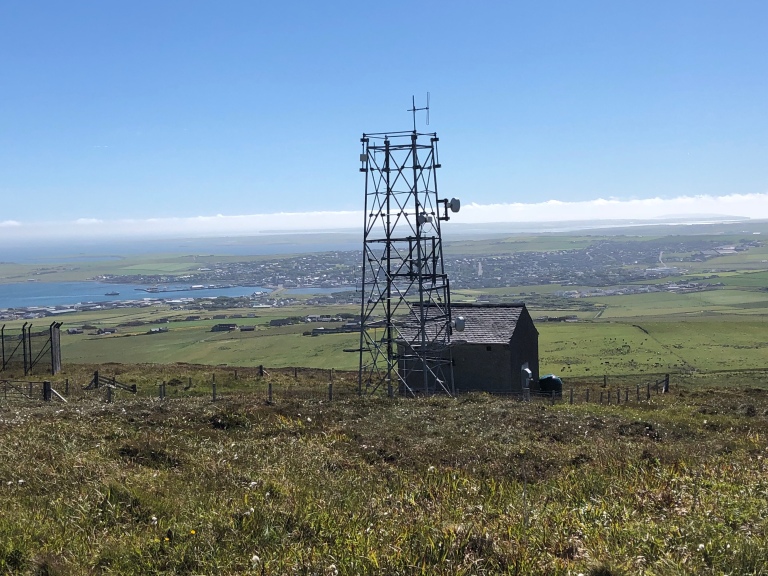 Panorama looking towards the outer islands.

On the road again, 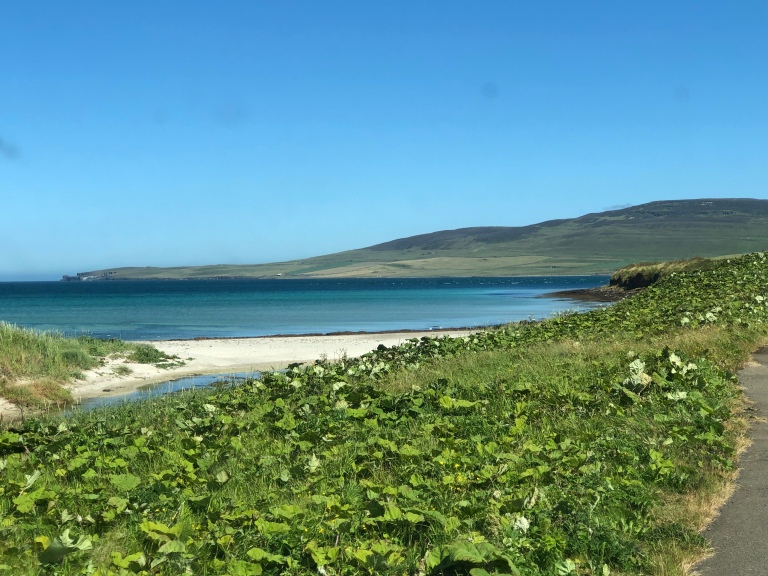 Saw this seal wallowing in the water.

to next stop, the Gurness Broch. The Broch dates from the 1st century BC, and was occupied by both Picts and Vikings. 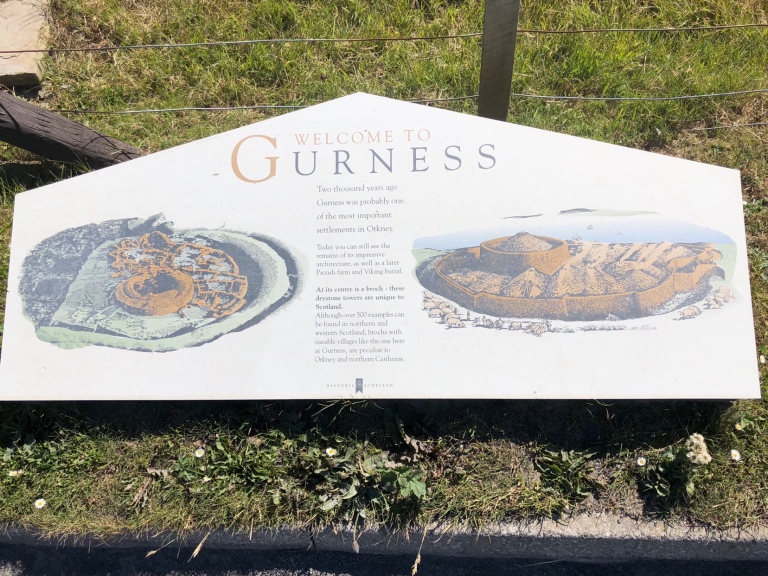 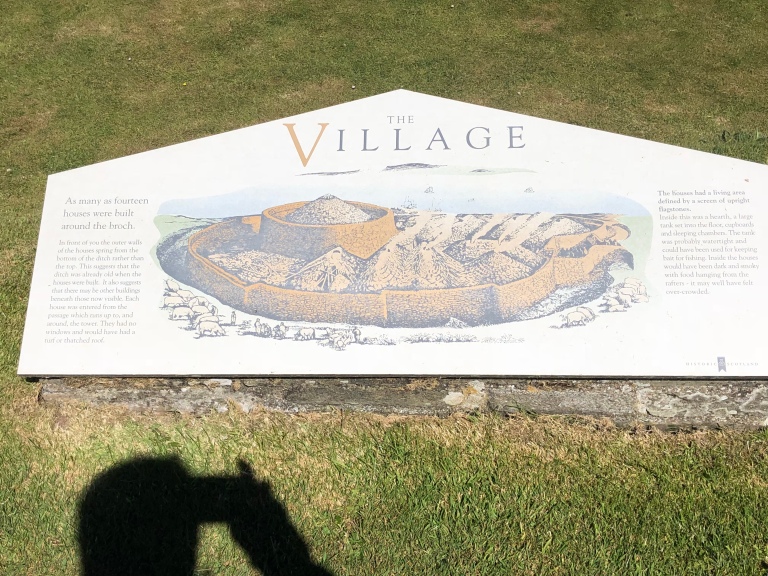 Bet this could tell a story.

Each building had a well in the central room. 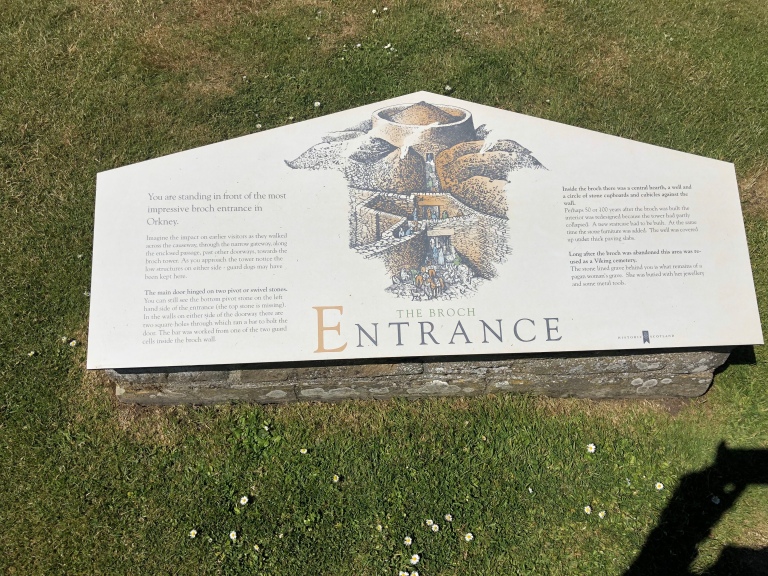 Wonder what this was used for?

Headed further up the coast to Birsay, but when we arrived the tide was still going out, but still great views. 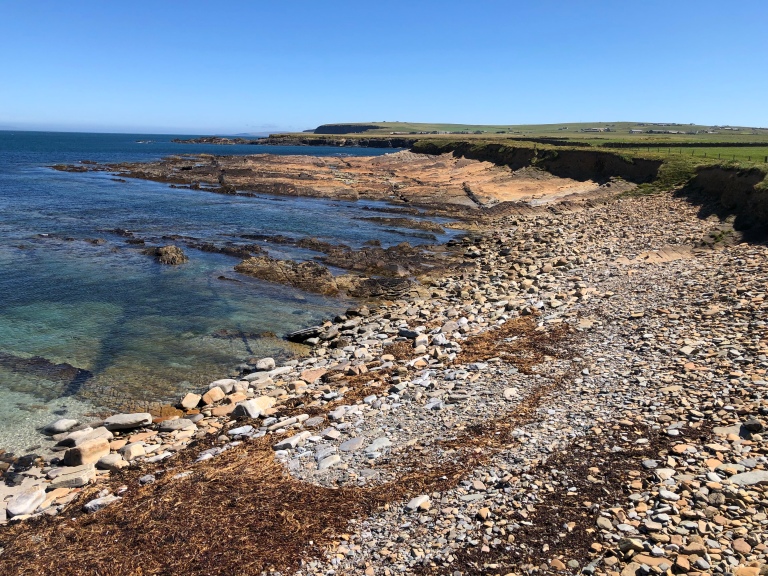 The path leading across to the Brough of Birsay still has about a metre of water over it.

While we waited for the tide, we went up to the Birsay tea rooms for lunch and a great view.

Brough of Birsay in the distance. 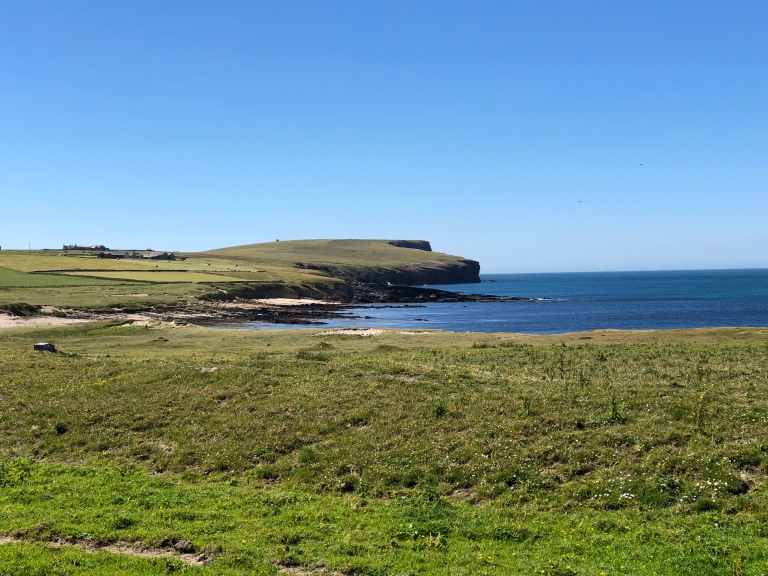 Panorama from the cafe deck.

Sitting in the sunshine doing what she loves.

Lunch over, we walked down the hill to look at Earls Palace and St Magnus Church.

Earls Palace was built in the late 16th century by Earl Robert Stewart. 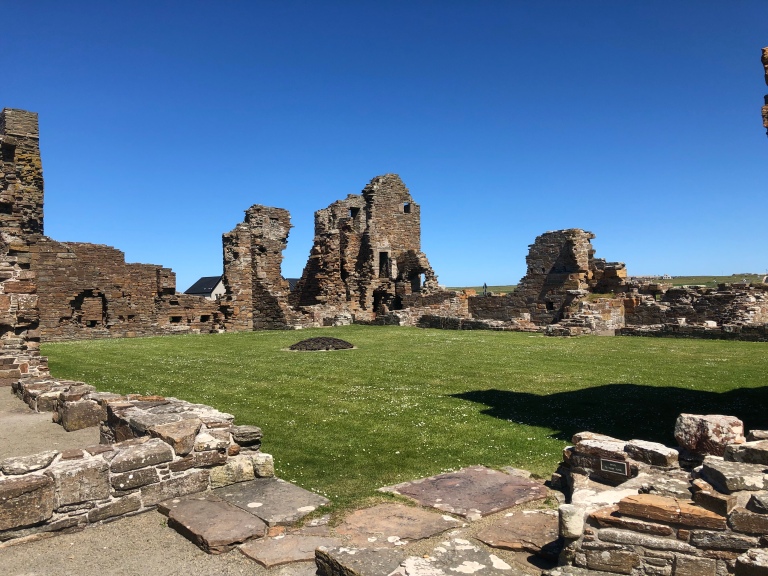 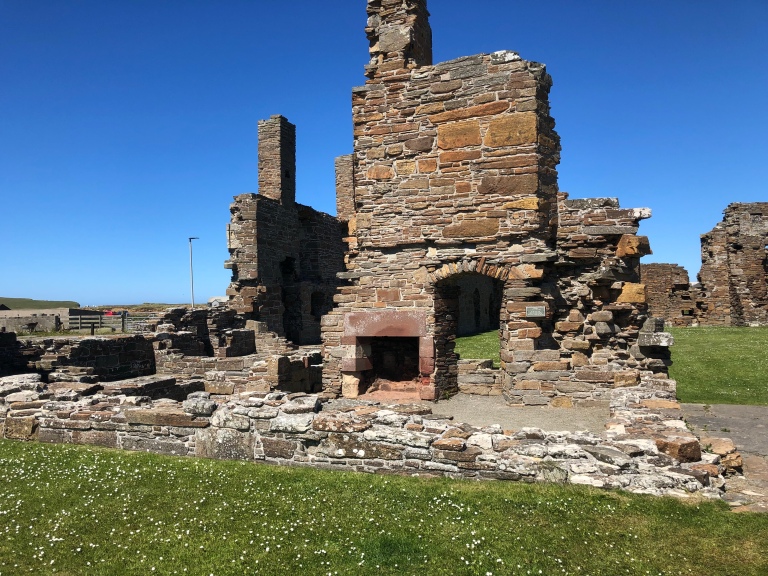 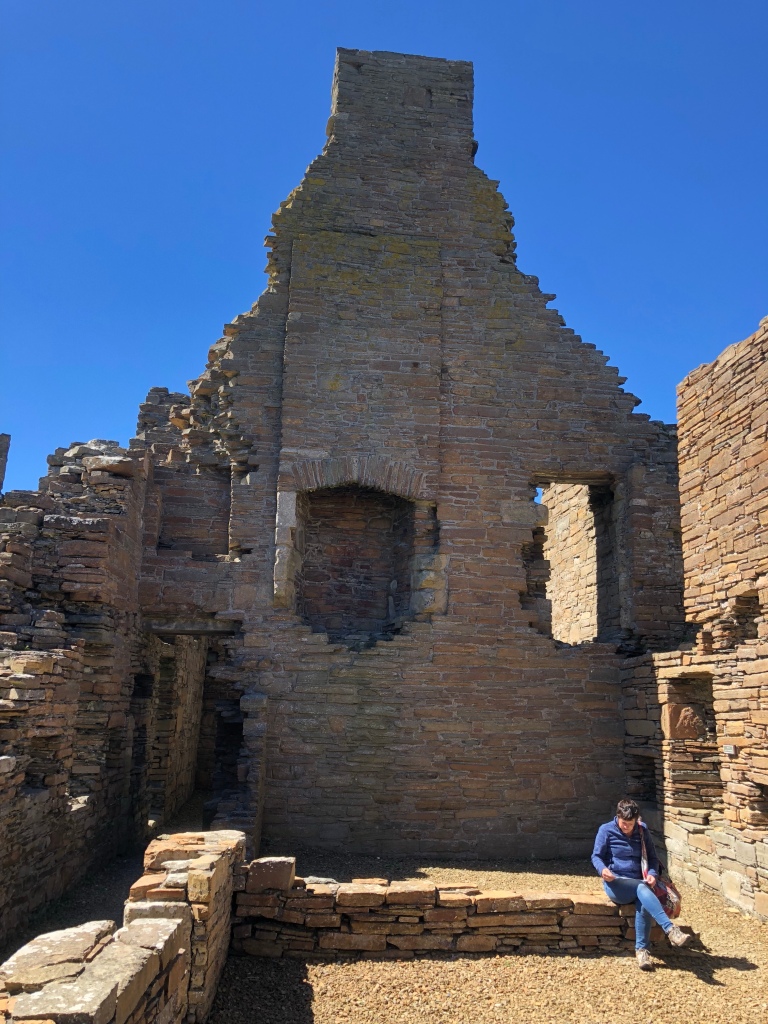 Remains of a spiral staircase. 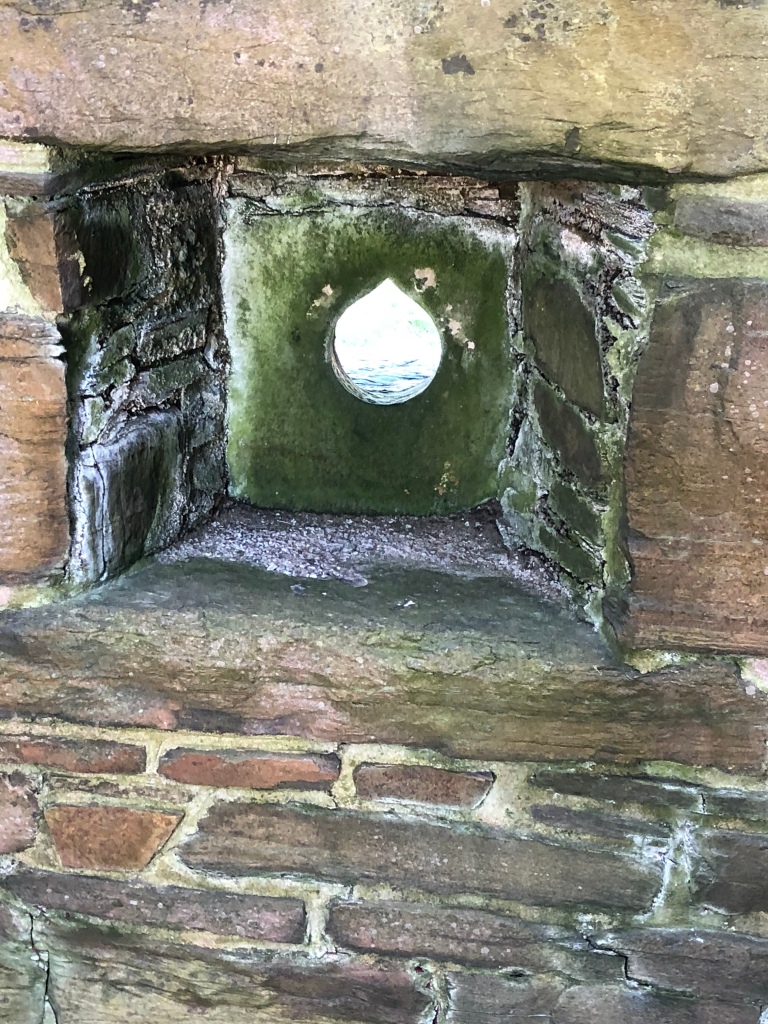 Well in courtyard which is still operable.

Across to St Magnus Church, built in 1604 and rebuilt in 1664 and 1760, believed to be where St Magnus’s body was taken, after his murder by his cousin Haskins in 1115. His remains were later re-interred in St Magnus Cathedral in Kirkwall.

This church was built on the original church. 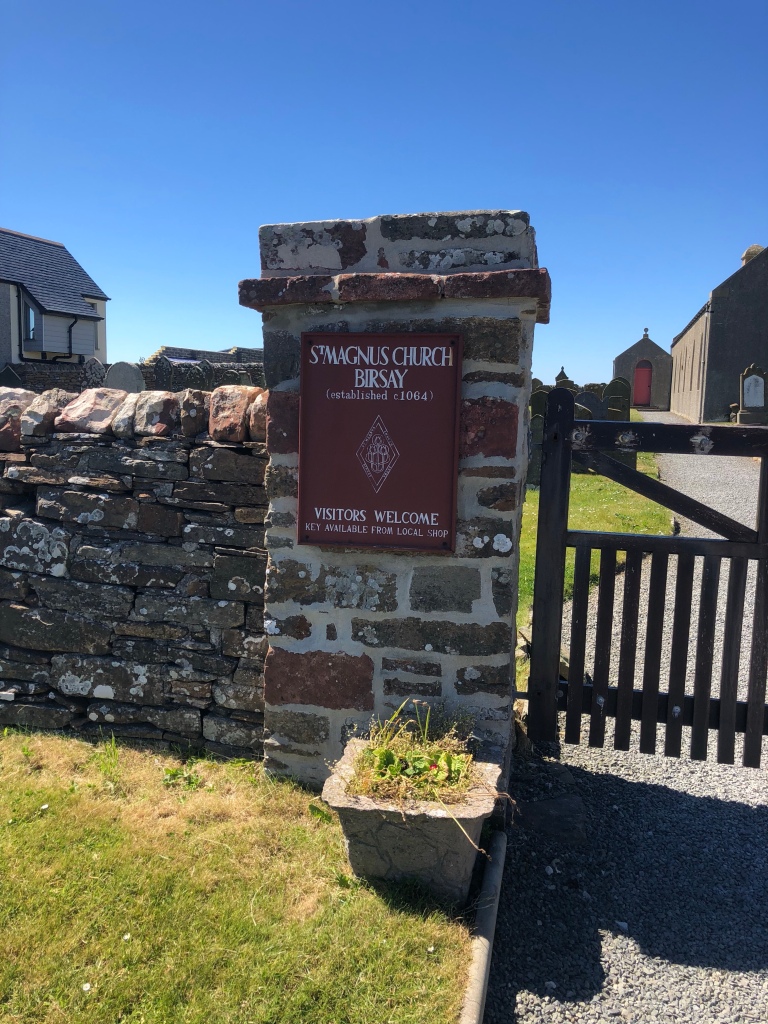 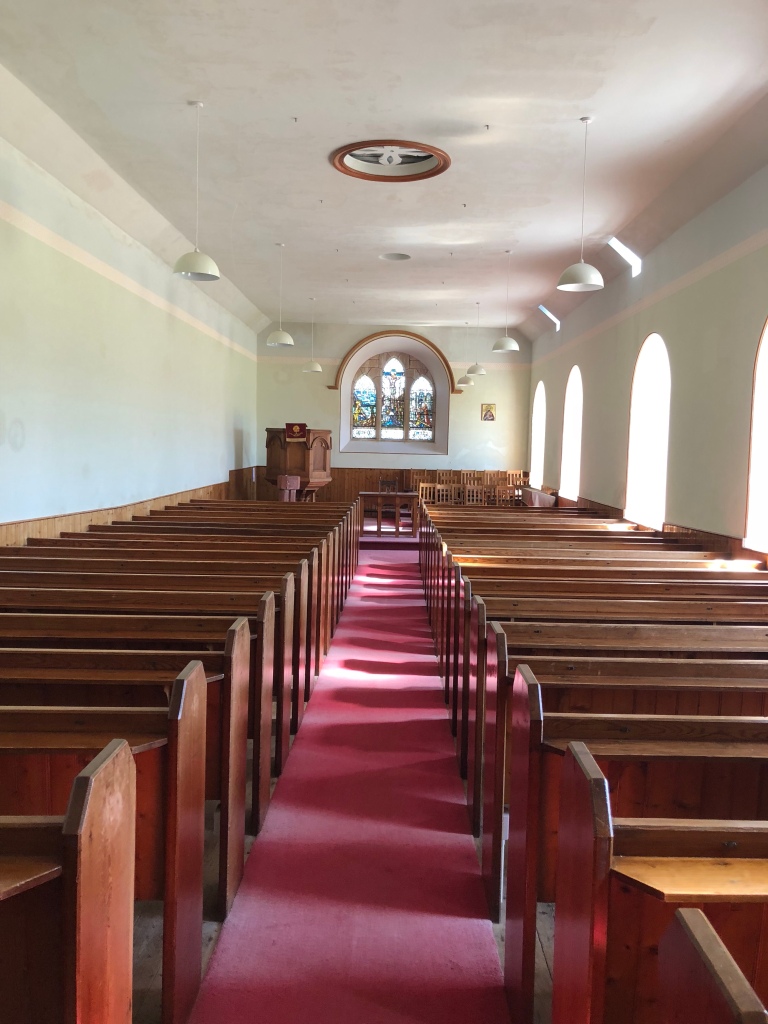 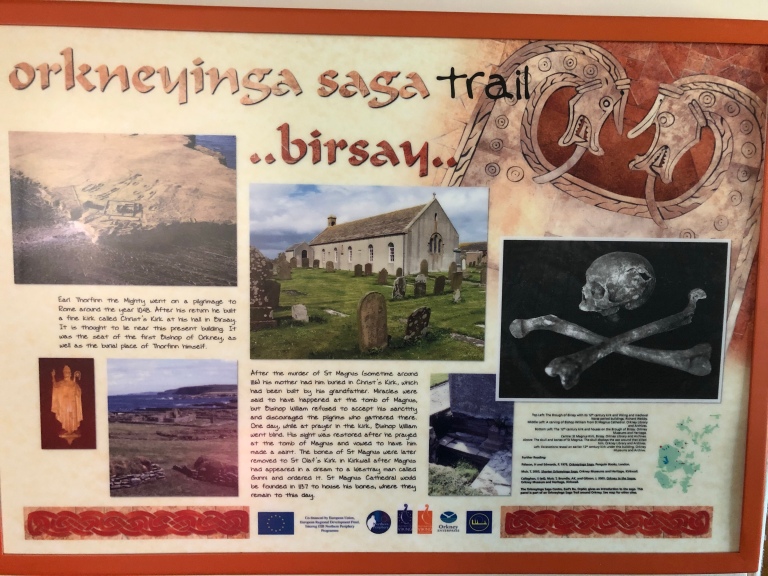 The relics of St Magnus . Note the damage to the skull where the axe hit him.

Tides out, down to the Brough of Birsay.

This Triumph was in the car park. 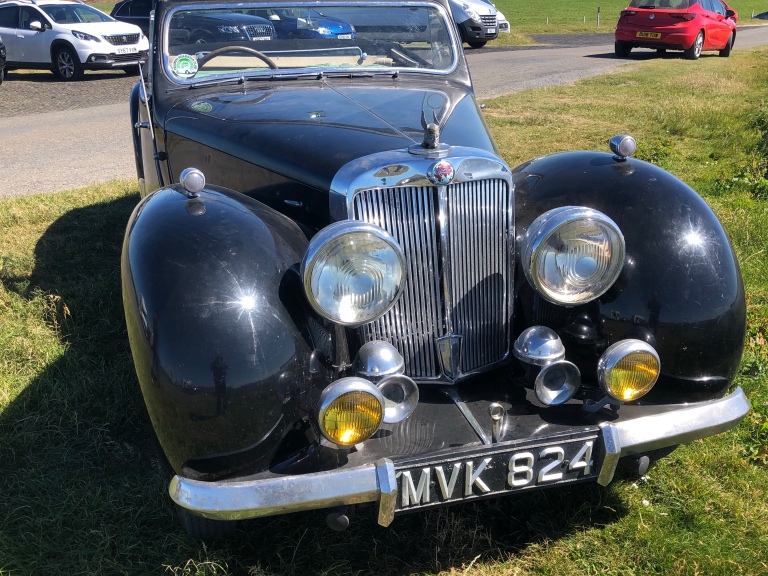 Notice the difference in the tide from a previous photo. Walkway is now exposed. 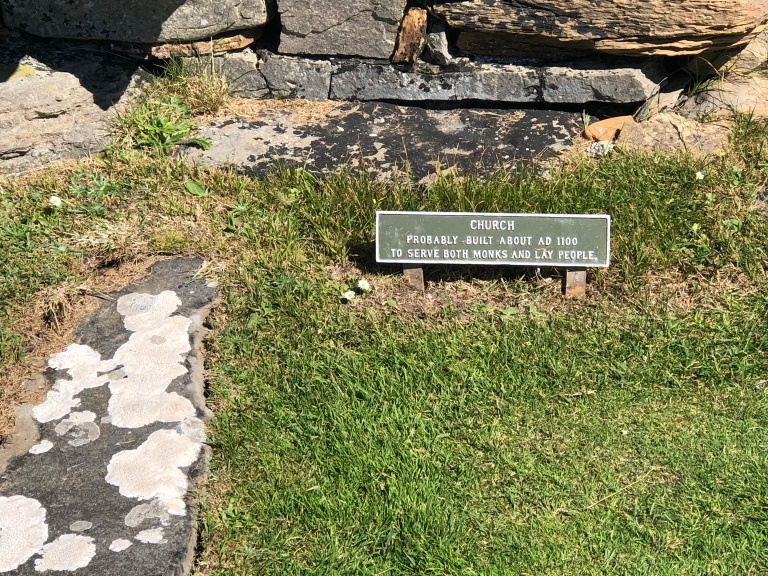 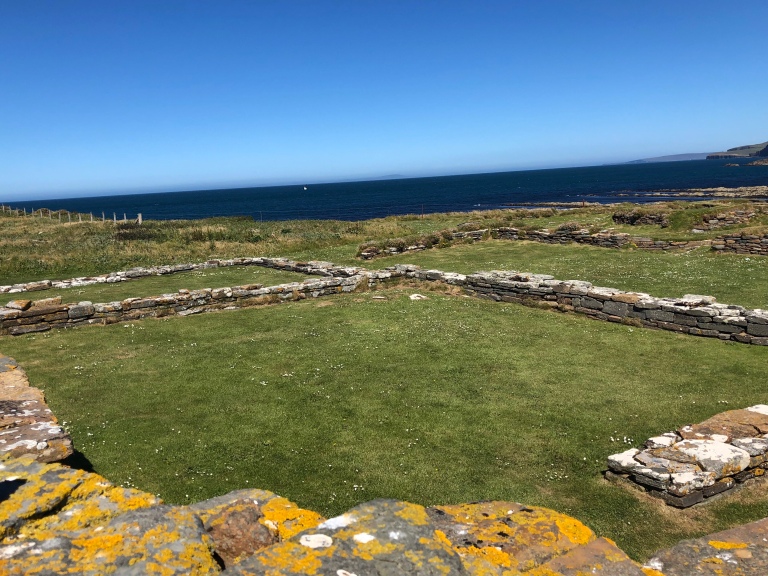 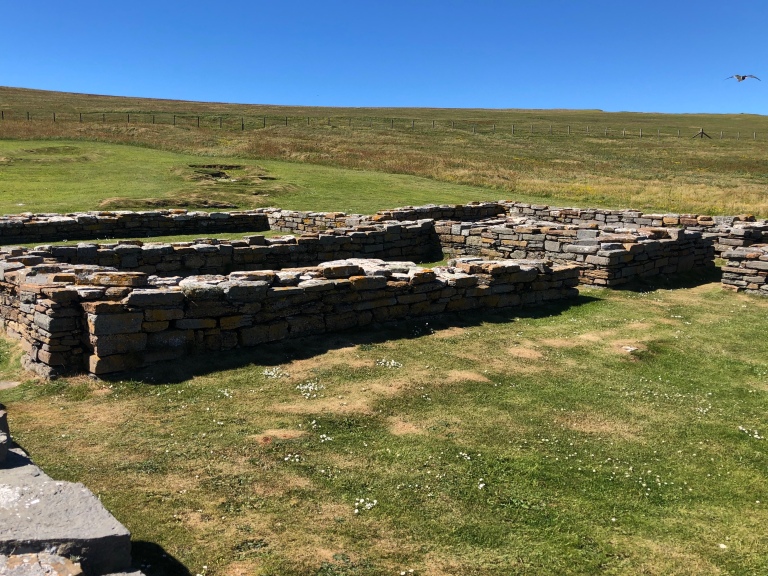 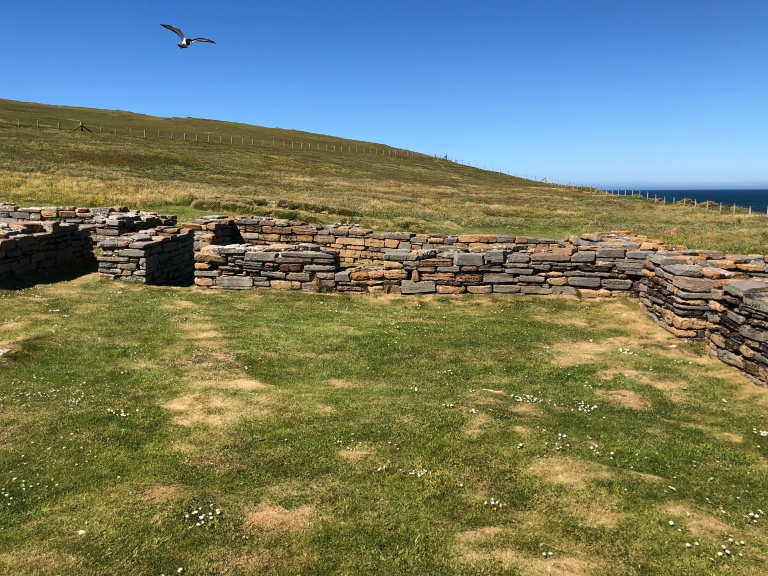 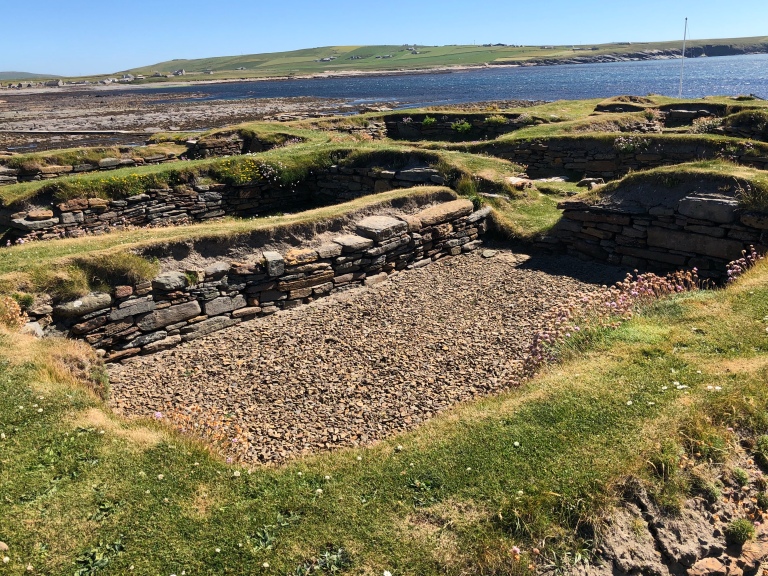 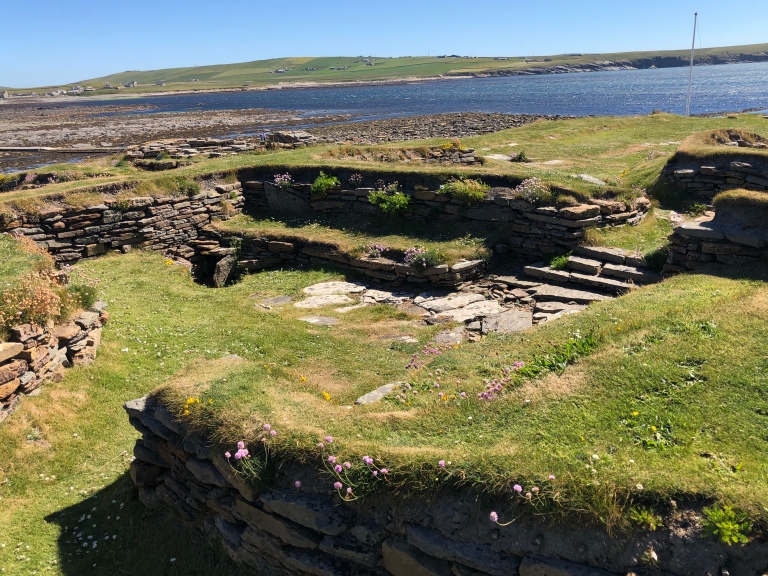 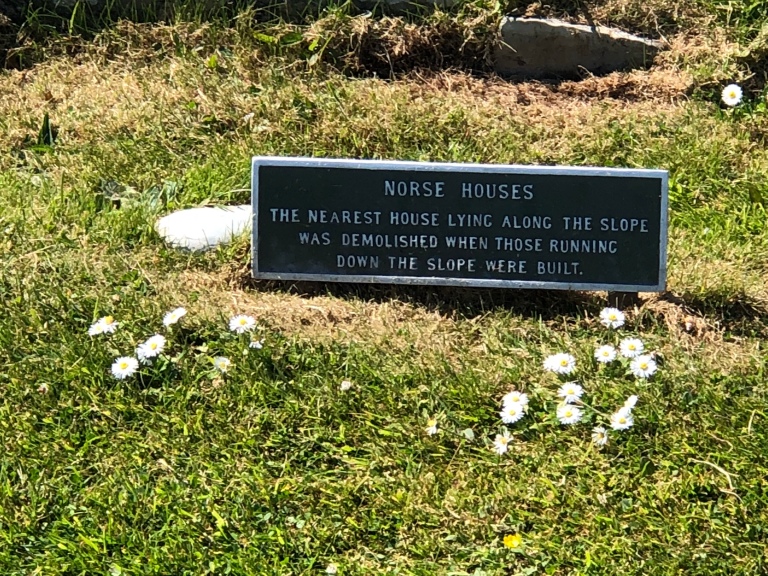 Up to the top of the Broch for some amazing views.

Longaglebe, a deep gorge eroded by the 200 metres inland.

Cliffs on the mainland.

Looking back across the water to the town of Birsay. 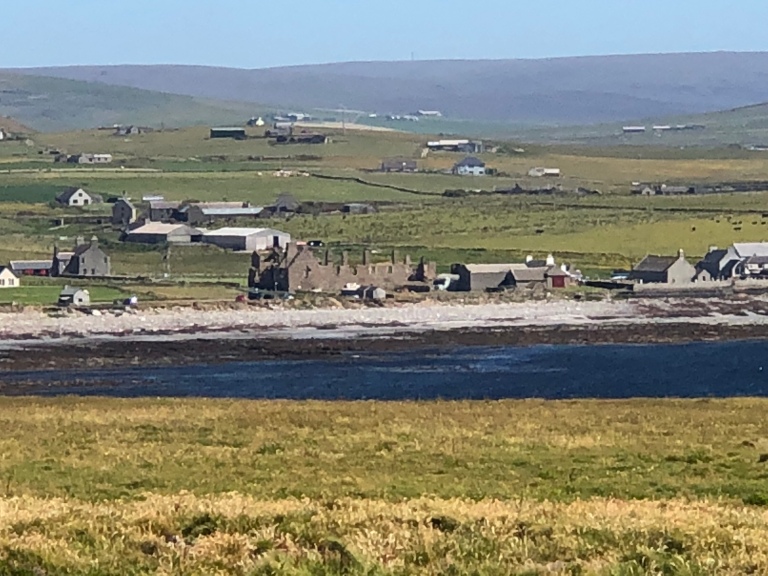 We are about 400 feet above the water. 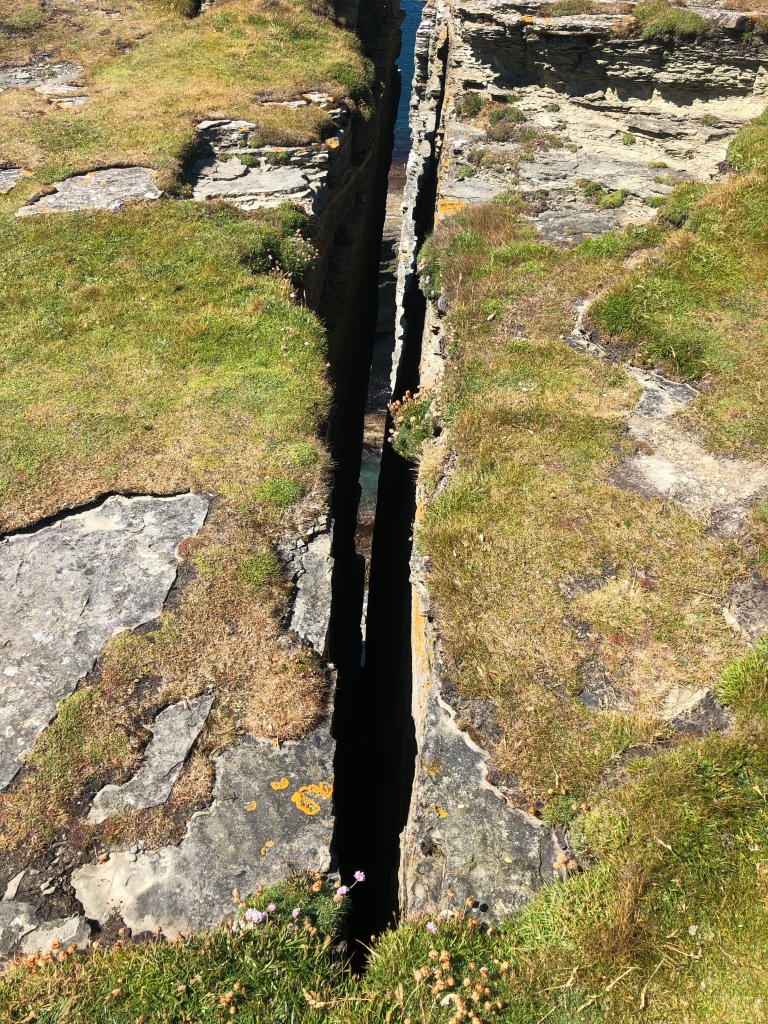 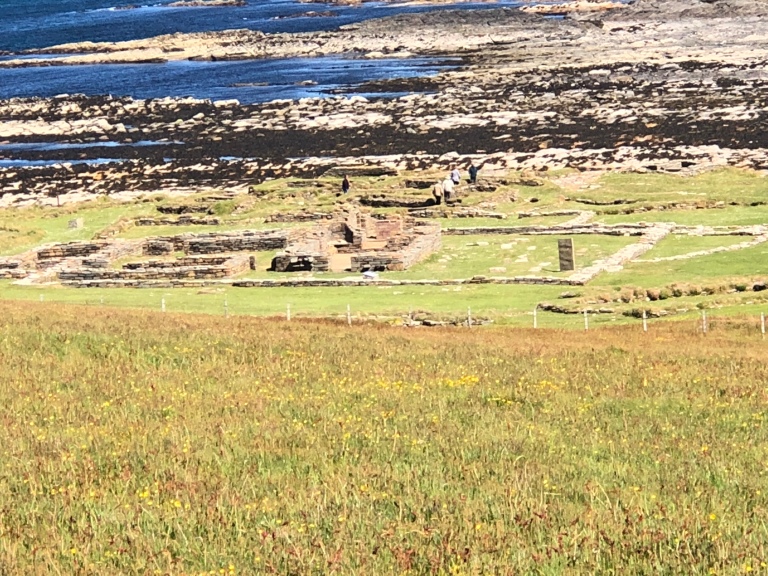 This is what is on the standing stone in the middle right of the above photo. 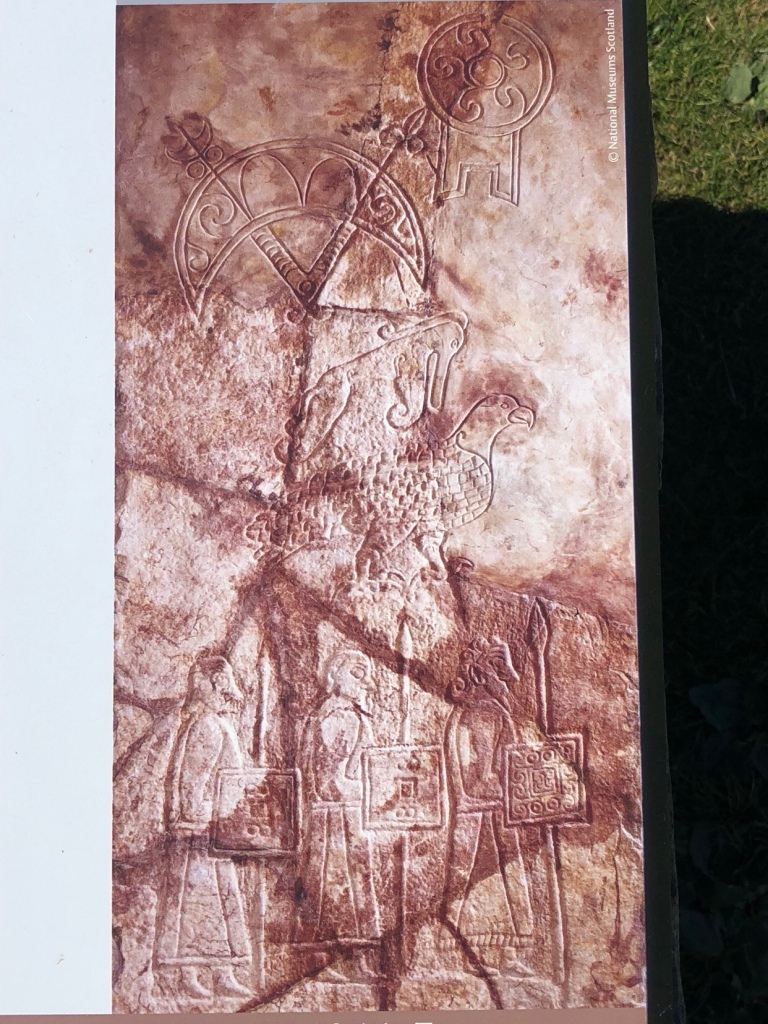 Headed back across the walkway to the mainland. 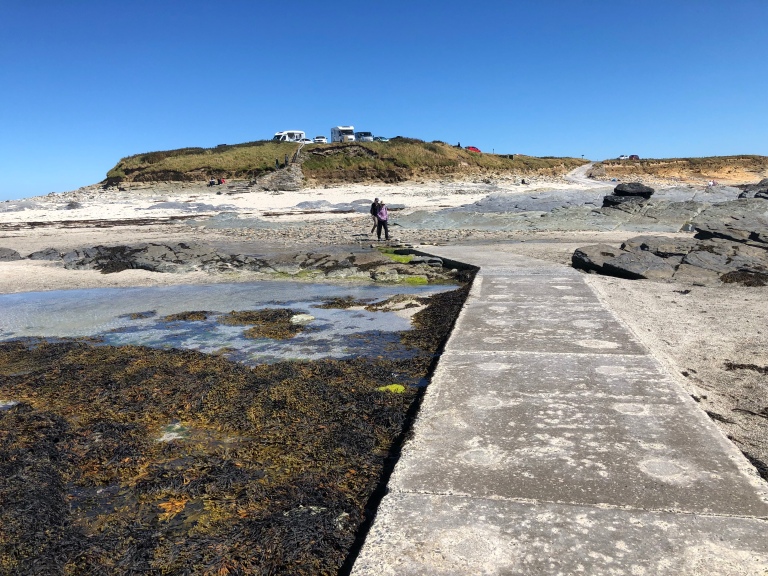 Another of nature’s wonders. 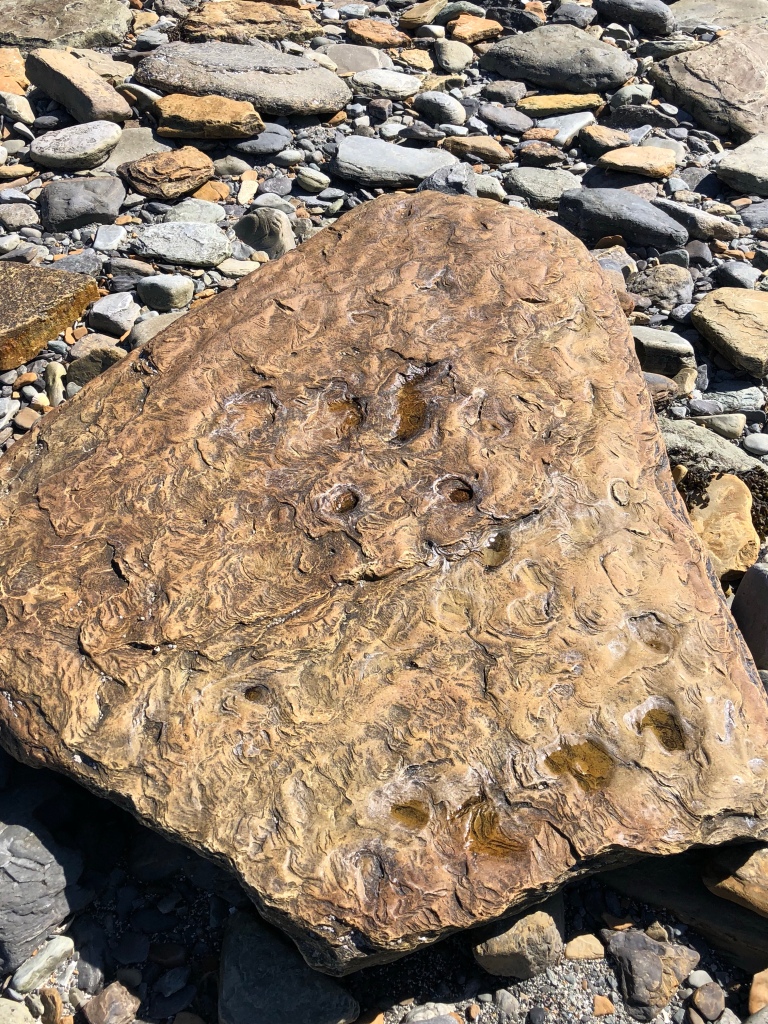 On the road again back to Kirkwall after another fulfilling day. We have done some serious walking over the last two weeks, around 96 kms.