Arrived in Iceland last night at 11.30pm, still daylight. Came on WOW air and all the aircraft are named after family. Ours was Sis.

1.30am, we are finally in apartment. View out the window at 1.30am, yep still daylight.

Checked out apartment, not bad, great views on both sides, and it’s not often you get to sleep in a wardrobe. 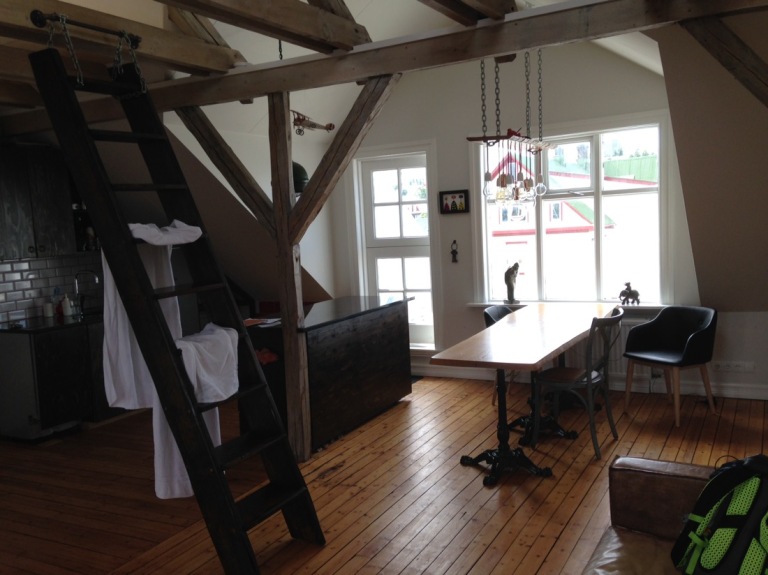 Doesn’t matter, 2.00am, dog tired, now been up 20 hours. A picket fence would look great. Had to close the skylight blind to keep the sun out. Actually the sunset was officially 12.15am, but someone forgot to tell the sun, it decided to sit just above the horizon, and official sunrise was 3.05. Guess we will just miss that.

Woke this morning at 9.30 to blue sky, with a spattering of cloud. Off to find an eatery for breakie. Down those 57 steps to find we are in the Main Street, and an eatery directly underneath us.

That done, off on our Icelandic adventure. Sunny 12, and they are setting this up.

There were no shortage of volunteers.

How is this for recycling. He he.

Looking back up Main Street to the Lutheran Church, which we will visit later.

Couple of these Sarah. 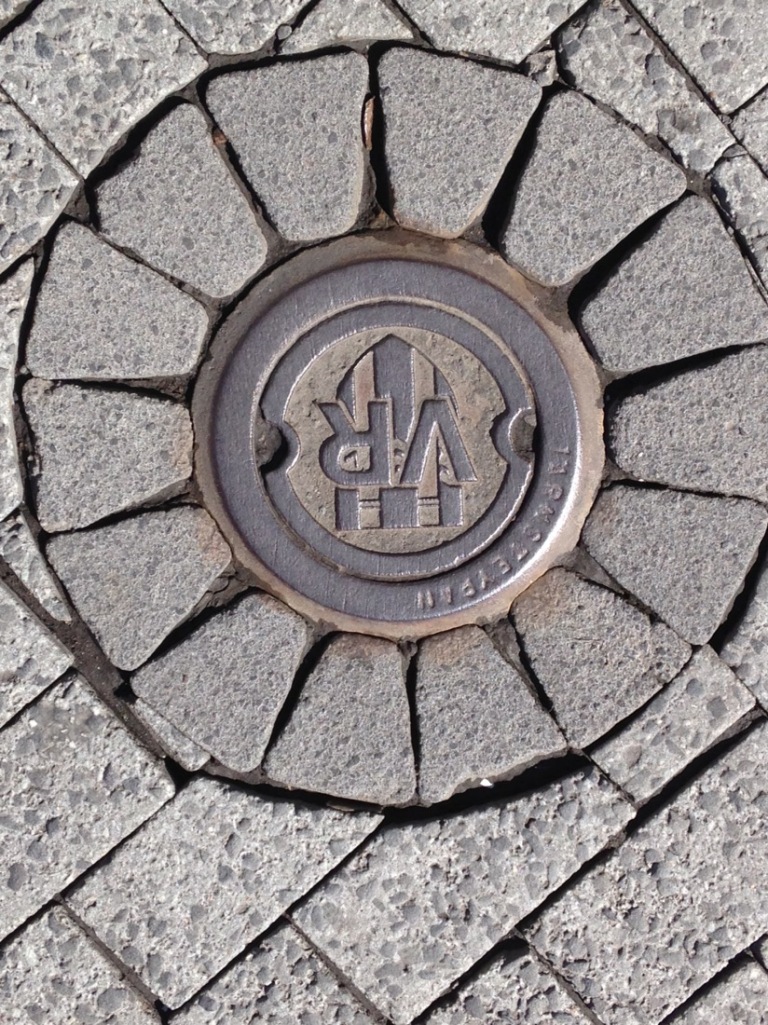 Church in the distance.

Nature calls, but that is a serious door. Obviously a bank of another kind in a past life. Either that, or loo paper is expensive over here.

Observed this character wandering past, in a traditional Icelandic kilt. 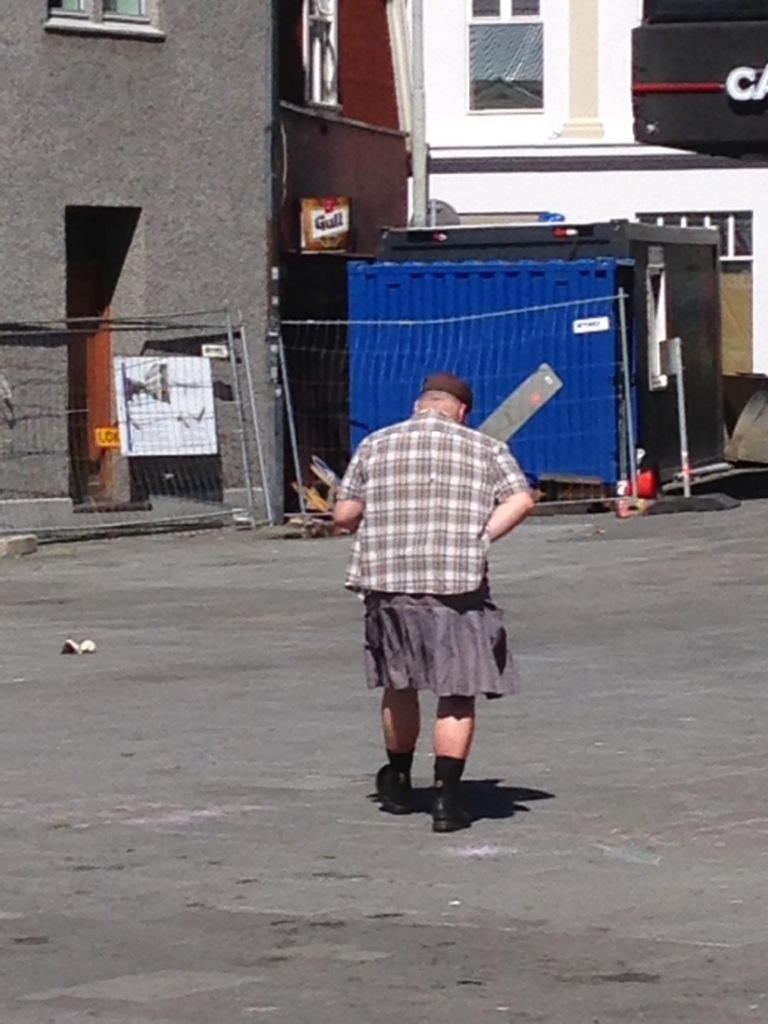 Off to the tour company to organize our week. No driving this week, all buses.

All done, onto bus for a tour of the city. There only 320,000 people living in Iceland, so everything is much slower, friendly and spread out. 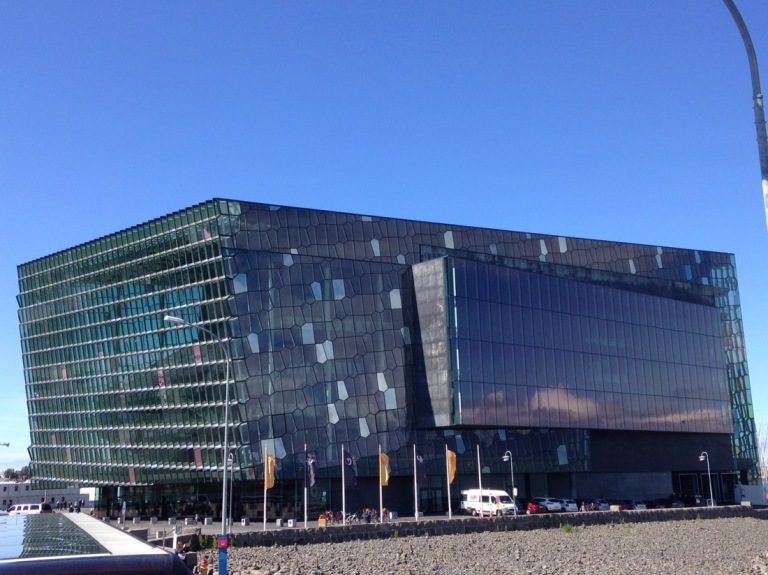 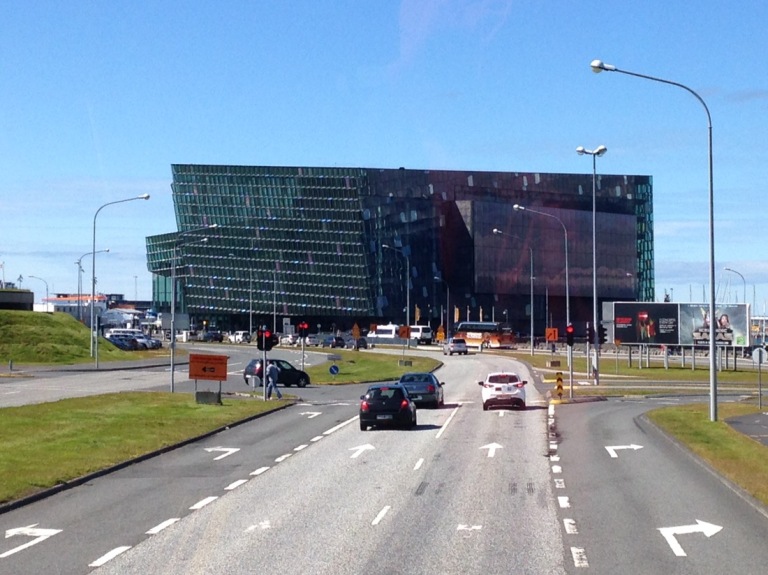 Catholic Church, only 2% of population are catholic. 97% are Lutheran.

Just some of the many murals scattered around the city. 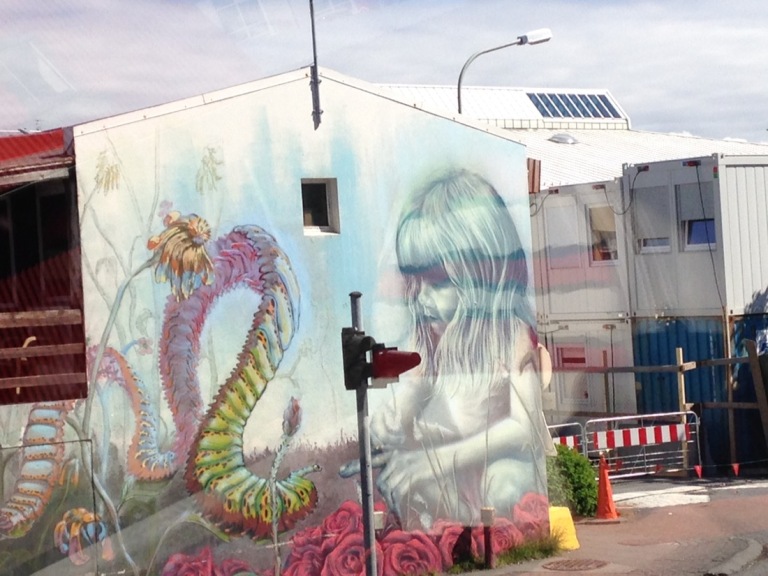 Glass dome, sitting on the towns geothermal water tanks, which houses a revolving restaurant. The heated water comes from up to 300 metres below the surface, supplying 85% of the city’s heating and hot water, including heated pools and sporting grounds such as soccer, to prevent the ground from freezing.

This is a worry, they are landing approach lights for the domestic airport. 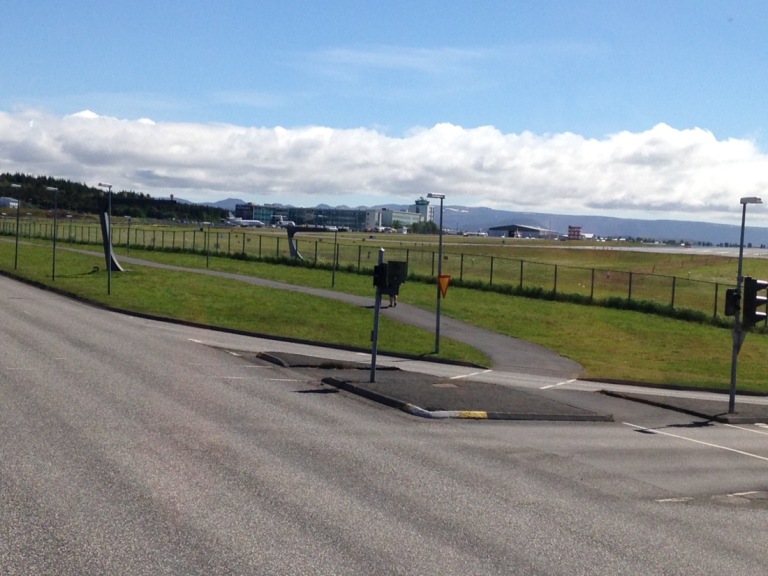 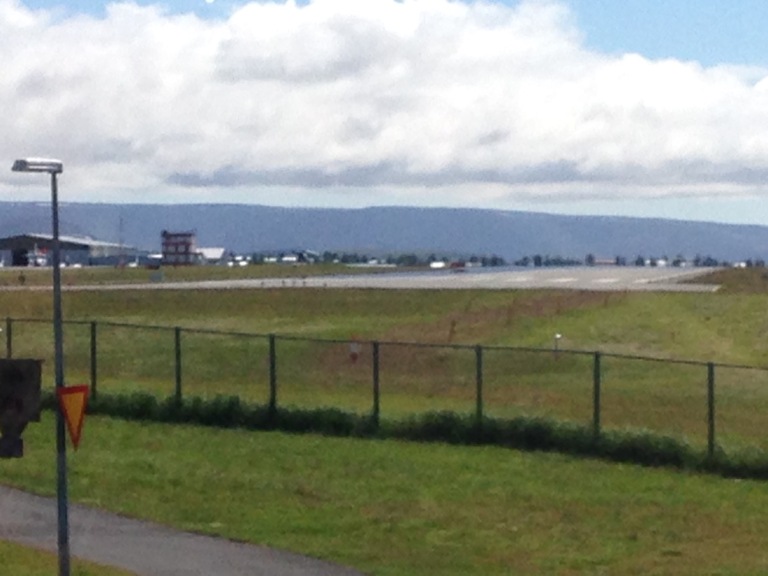 Size of the sewerage pipes running into the bay. 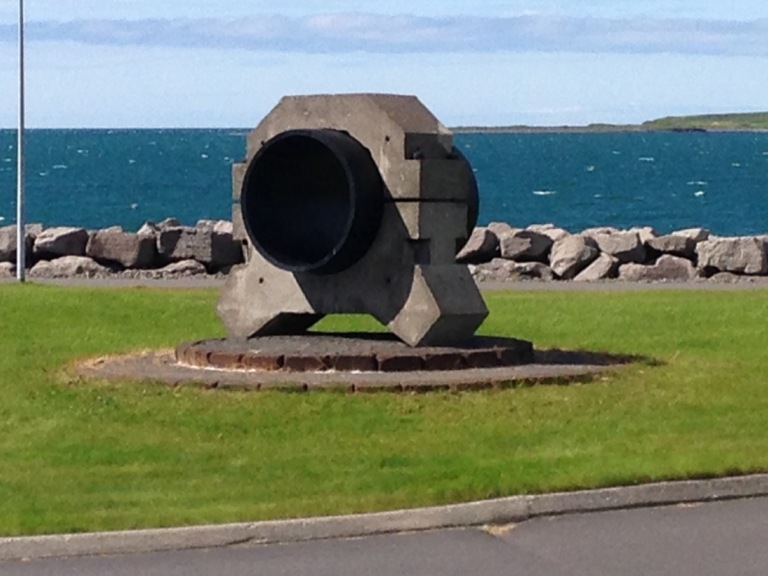 There are many of these along the bay. They treat the raw sewerage so that no contaminants enter the bay. The water is zvtually fit for human consumption.

Refinery around the bay.

Mountains across the bay which are covered in heather, and snow capped. 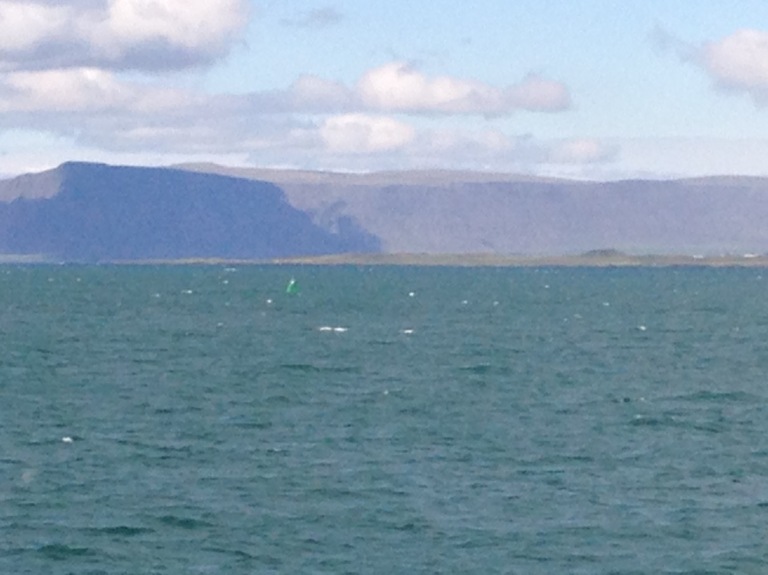 Sculptures around the city. 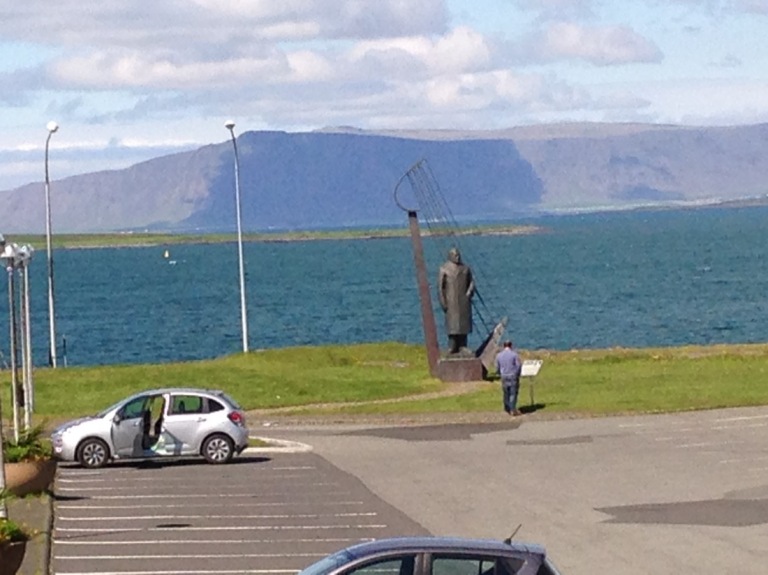 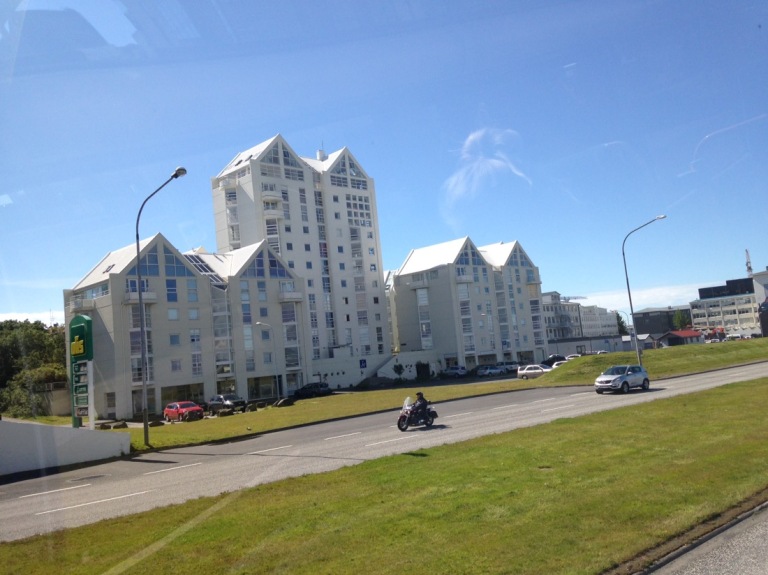 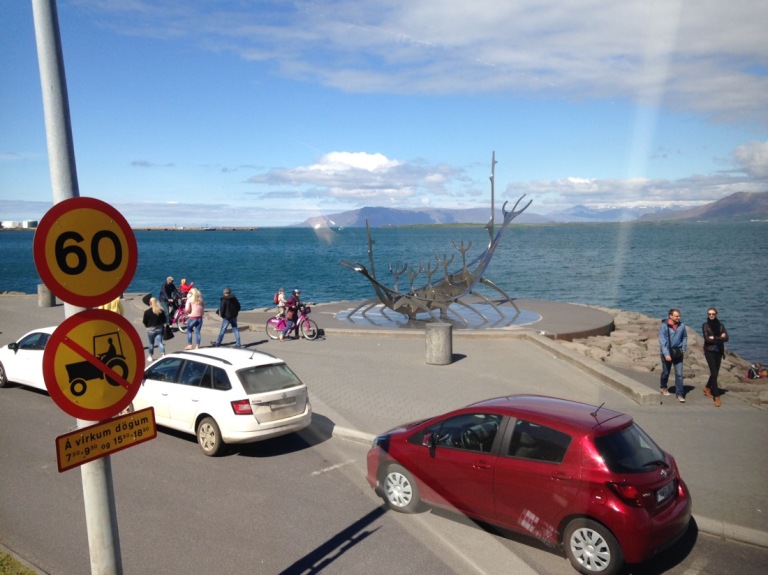 Caught the lift to the top of the bell tower for some magnificent views of Reykjavik. 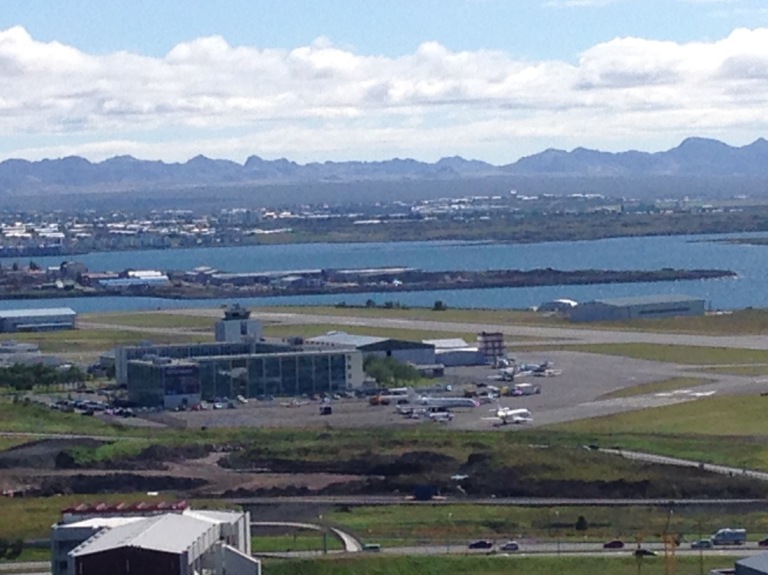 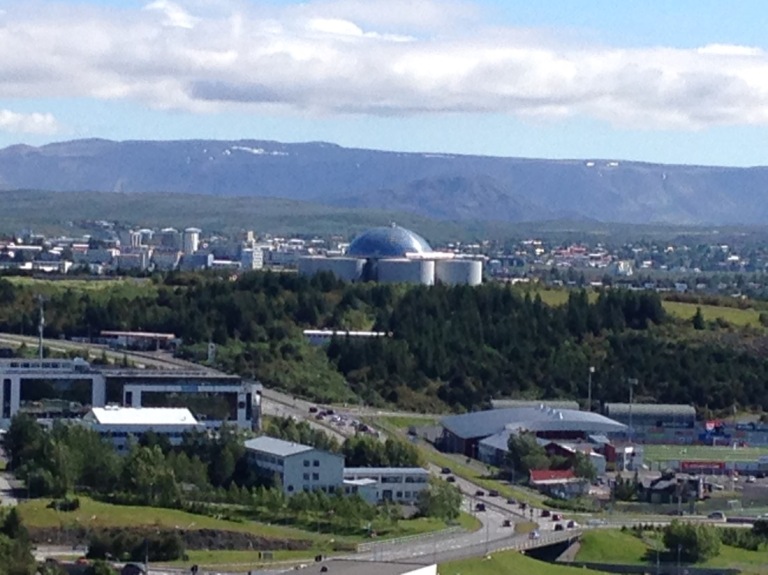 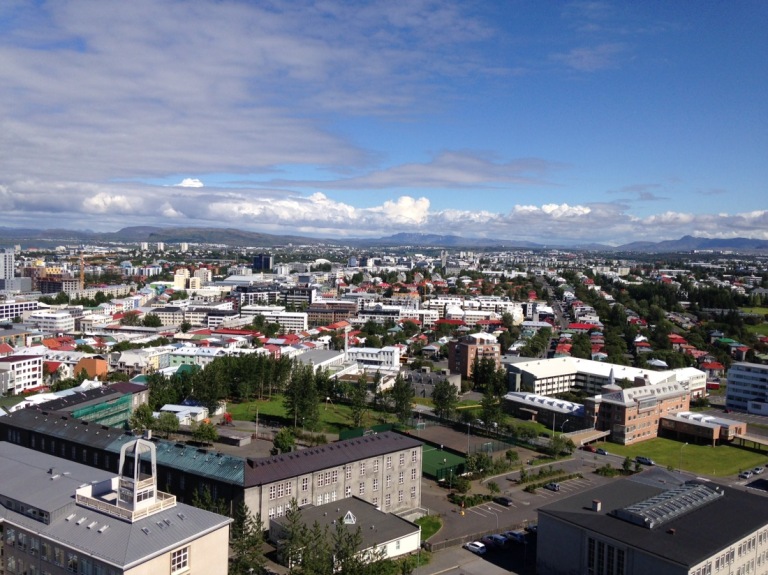 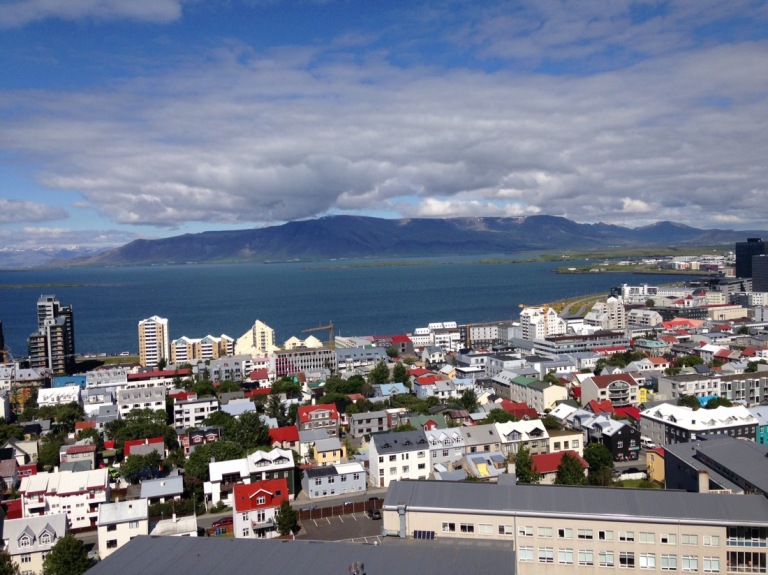 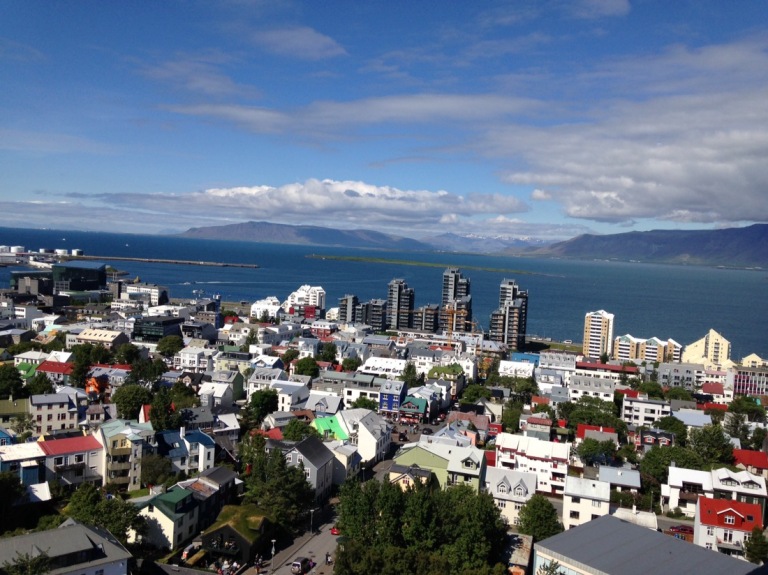 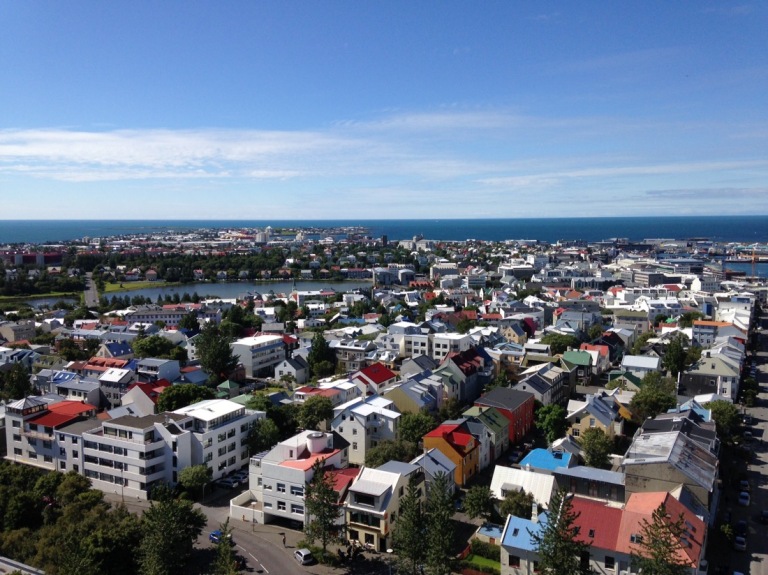 Looking across the roof of the church. 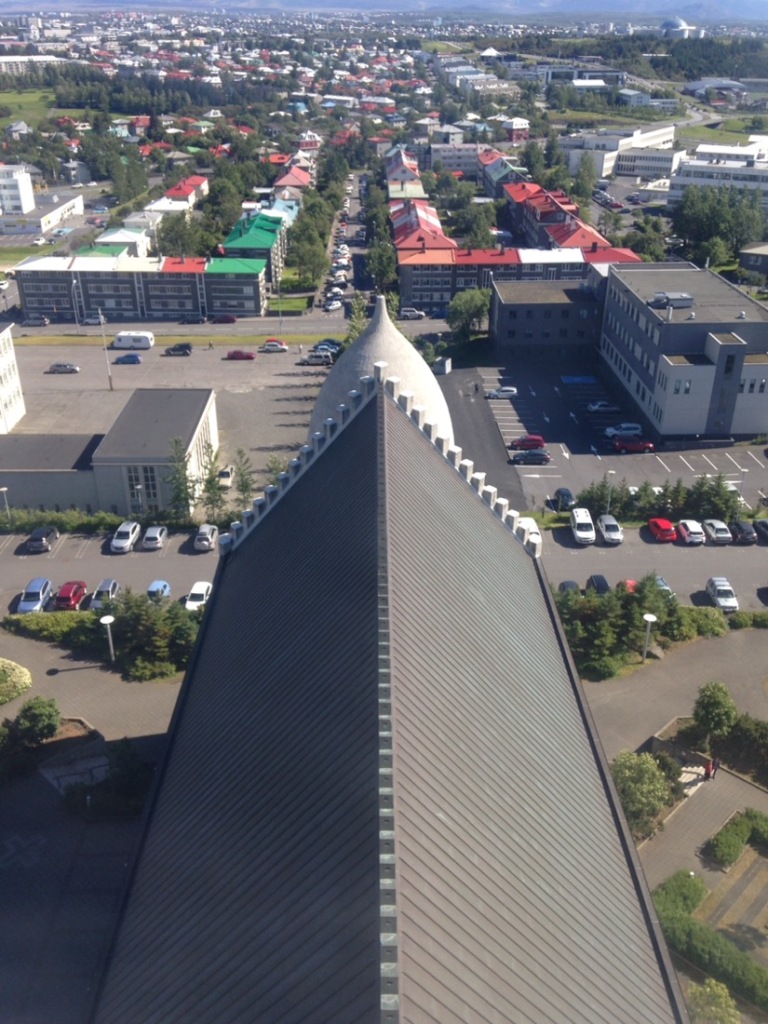 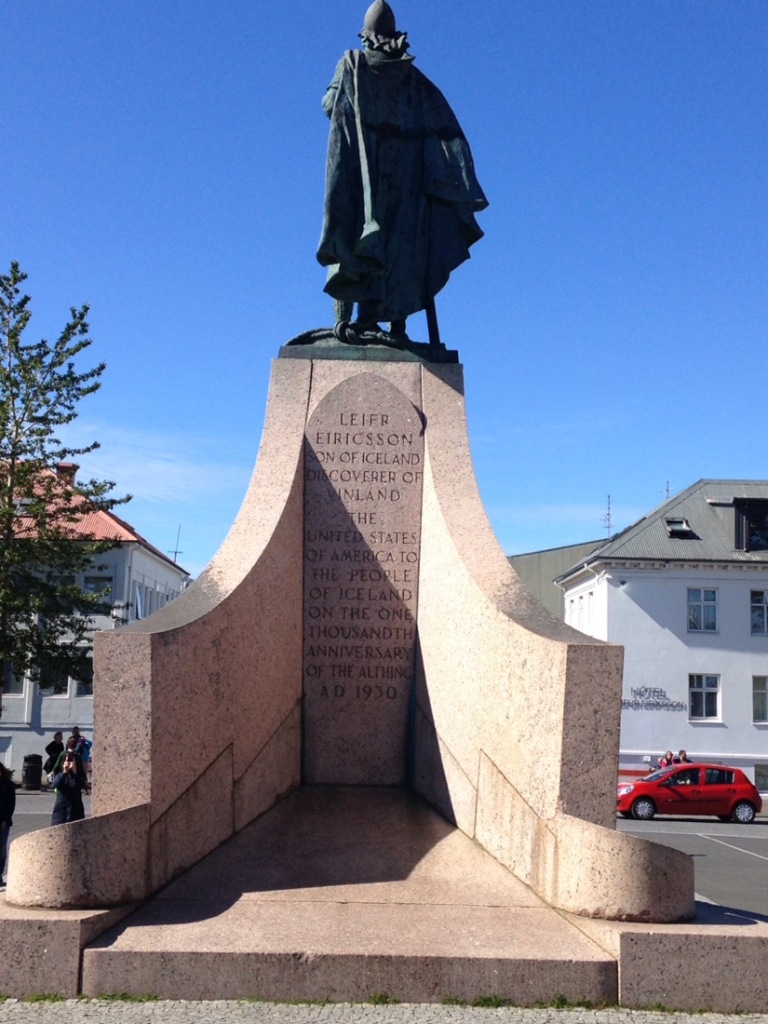 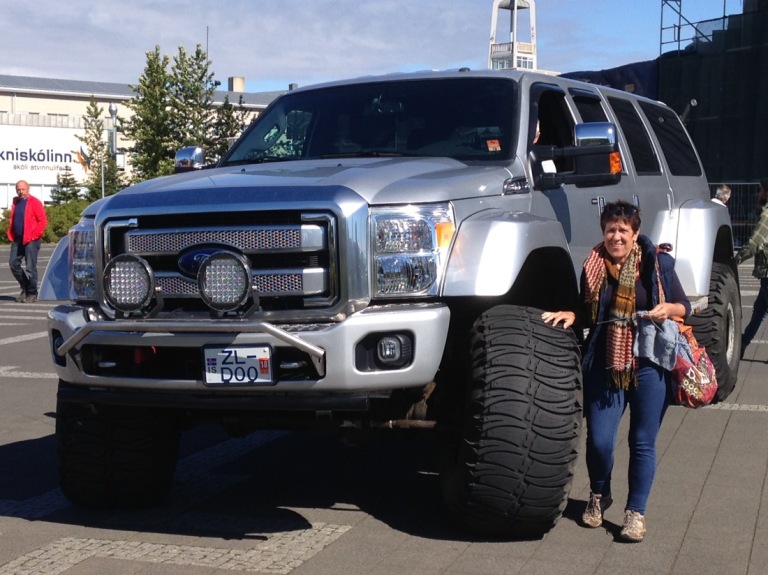 Any volunteers to mow this. 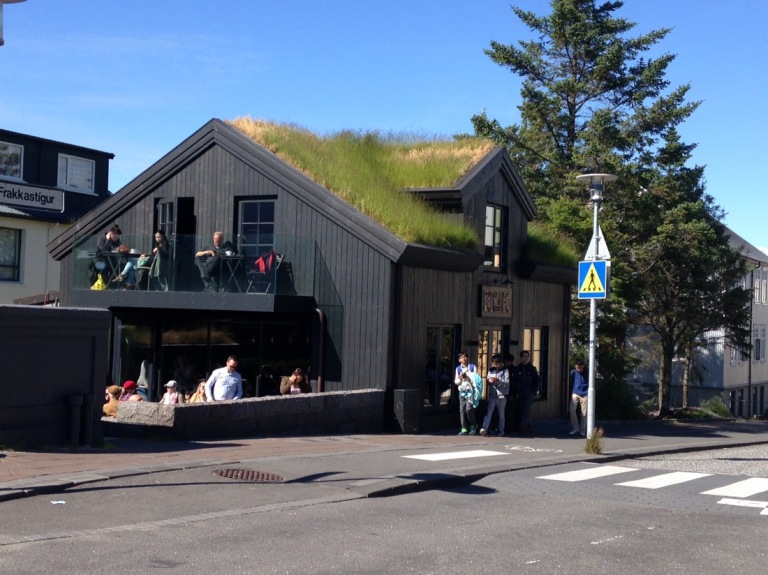 Met a couple of locals.

Lutheran church looking back up the hill.

Our place from the church bell tower. We are in the loft section to the right of the green roof. 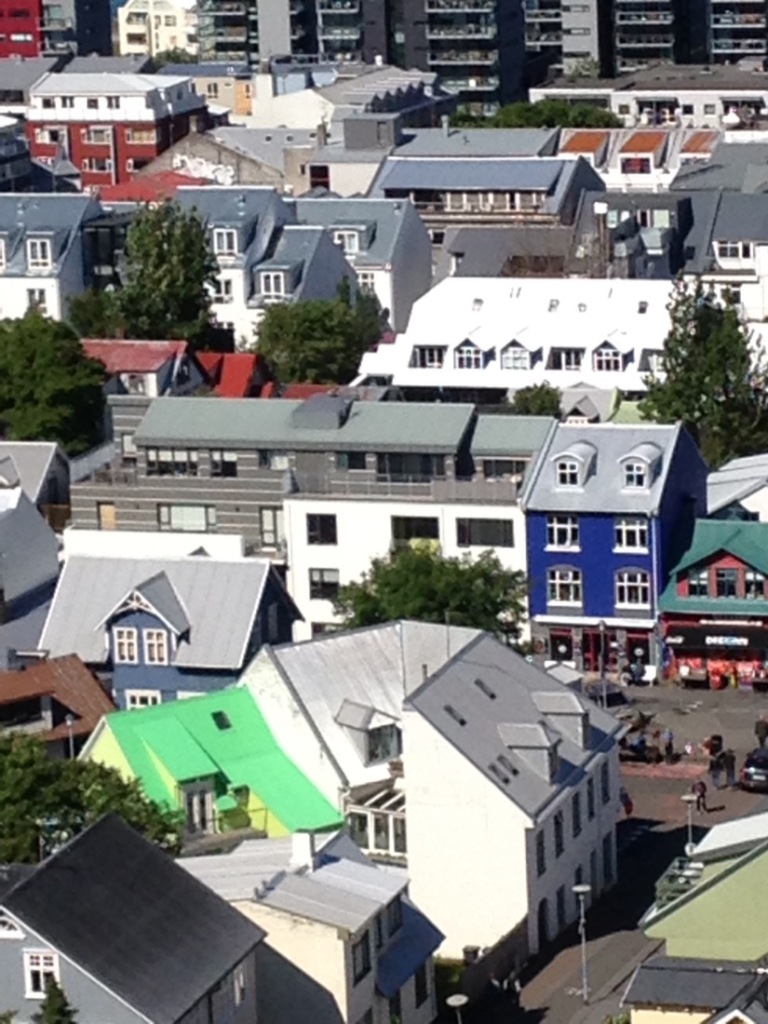 7.30pm, back to lodgings for a rest and refreshments later. At least we don’t have to worry about walking home in the dark.